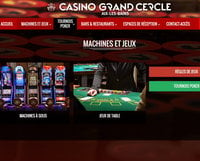 At the end of this year 2012, the directors of French land based casinos are not looking so enthusiastic but hope none the less that the new year that is beginning will be different to the one that is ending. It must be said that the poor economic situation affected them badly and caused a major drop in the number of clients. Not forgetting that the ban on smoking in public buildings and the legalisation of online gaming also had a negative effect on them. However, at no time did the casinos give up and they didn’t hesitate to innovate to attract clients. So large financial investment meant that new slot machines with minimal wagers could be acquired to attract a less wealthy clientele that didn’t usually visit such establishments.

Changes took place also in the area of entertainment which developed considerably and also in the setting up of smoking rooms. In general the past year has had a negative effect on the casino profession as a whole which is having difficulty keeping its head above water. However the Aix les Bains Grand Circle Casino is the exception to this. In fact, even if its annual end of year statement is close to zero, it is still positive at 0.06%. Its losses are 20% while those of other casinos are nearly 30%. The Aix les Bains Grand Circle Casino is pleased with these figures which mean that it moves up two places in the national classification to reach 19th place.Christophe Guerin, the Chairman, believes that these satisfactory figures are the result of several investments. The casino has been entirely renovated and over 4 months 12 one armed bandits will be replaced which is an investment of 360 000 euros. Also an emphasis was put on entertainment in order to offer varied entertainment over the whole year.

In spite of all this effort, the Aix les Bains Grand Circle Casino is preparing to face a difficult year and knows that it must not give up. Savings will be made in the lighting of this sumptuous casino and it is very likely that unfortunately some work contracts won’t be renewed.