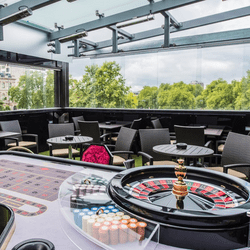 Today we report on a VIP player from Croatia who is in the process of suing the prestigious Park Lane Casino in London. Juste Puharic claims the casino did not live up to its word to pay him a commission to play high-stakes  games at their tables.

The case is currently ongoing in the High Court and Park Lane Casino denies any wrongdoing.

What Are the Details of the Case?

Croatian high roller Juste Puharic claims that Park Lane Casino made him an offer to match any cash back deals he received at other casinos in the high-end Mayfair area of London. In May 2015, the Croatian wagered £27 million in a multi-day high stakes gambling session at Park Lane’s roulette tables. He finished £1.5 million up, and claims that Park Lane then refused to match the 0.9% “Win or Lose” commission he had received at other Mayfair casinos.

Puharic claims that under the terms he was offered the casino owes him £243,518.

Park Lane Casino claims that no such formal offer was made, although it does acknowledge that a member of staff may have made the offer. Lawyers representing the casino have asked the High Court to throw out the case as there is no evidence that such an offer was extended. He also claimed that such offers were never made to players who beat the house.

The case is ongoing, and we’ll keep you abreast of any new developments as it proceeds.

The case is only one of Park Lane Casino’s problems this year. It recently had its UKGC license removed after the commission was unable to find clear evidence of how a deal to transfer ownership of Park Lane was financed. Once again, this proves that the UK Gambling Commission takes Know Your Customer and Anti-Money Laundering regulations extremely seriously. If it can revoke the license of such a well-known and prestigious casino, it can take the same action on any other operator.

While few players could afford to wager the sort of money that this Croation high roller did, some of us can wager a few thousand dollars, and at most live casinos online, that’s enough to receive the high roller treatment.

US and Australian players can play roulette, blackjack, and baccarat at Red Dog Casino. UK and European players can try their luck at Mr. Green. These live casinos are happy to accept bets of all sizes. You can play games from $1 per hand or up to $2,500 at some tables.