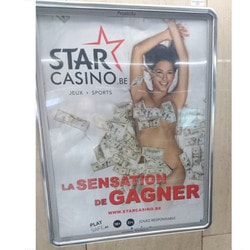 Since the 1st of January 2011, online casinos have been legal in Belgium. At the moment, there are 10 casinos with a gaming licence from the Belgian Games of Chance Commission. Each of these virtual casinos is linked to a land based casino. It’s one of the conditions of being able to offer games legally to Belgian online players. For example, Casino777 is partnered with the Spa Casino, Unibet with the Blankenberge casino, Betway with the Namur Casino and Starcasino with the Chaudfontaine casino, just to mention a few. An advertisement posted in some Brussels’ metro stations has caused controversy.

Live Dealers Casino brings you the story behind this advertisement  for an online casino that has caused a stir.

The online casino Starcasino’s advertisement in the Brussels metro wasn’t appreciated by several internet users. It consists of a naked woman on a bed, covered with notes and the slogan “That winning Feeling”. Some consider it to be sexism and have criticised the Brussels Intercommunal Transport Company (STIB) for allowing it. Social media has come out against this ad on Twitter, Facebook and Instagram. Being very active on social media, STIB took the internet users’ remarks into account and decided to remove Starcasino’s posters. The advertisement agency responsible for the campaign had completely lost out. Indeed, since the Harvey Weinstein affair, in particular with the #Me Too hashtag, advertisement agencies need to think twice before launching such an advertisement. Several internet users consider the advertisement by Starcasino, a legal online casino in Belgium, to be “sexist”. The STIB preferred to remove the posters to calm things down and the Advertising Ethics Jury (JEP) judged that they were “ insulting to women and an affront to dignity”. Starcasino’s next advertising campaigns will need to be approved by the JEP before they are published.

Players living in Belgium have a choice of 10 legal online casinos. Casino777 remains the leader. Casino777 is the best legal online casino for Belgian players. We have had the opportunity several times to praise this virtual casino. In the space of 7 years, Casino777 has built up its reputation with Belgian players both Flemish and Wallon. One can’t remain indifferent when faced with Casino777’s many online slot machines and its live dealer tables. Its high quality range of games meets online players’ requirements. It has all the games from a variety of developers. There is something for beginner and experienced players on Casino777. Payouts are rapid.

We don’t know if the fall out on social media in reaction to Starcasino’s advertisement that was judged sexist will benefit other Belgian legal casinos. To be continued…..