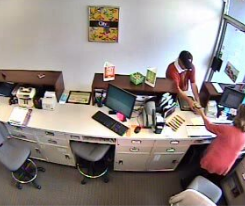 A gambling addiction can cause certain players, who can’t control themselves, to completely lose their heads. This is true for 52 year old Kerry Johnson a player addicted to blackjack who spends hours sitting at a blackjack table. To feed his addiction he decided that the best thing to do was to go to a bank counter, threaten the employees and get away with a large sum of money. It was all recorded  by security cameras and it’s unlikely the 50 year old will avoid a few years in prison unless the judge is lenient on account of his addiction to gambling.

More than 6 hours at a blackjack table

On the 3rd of August 2016, at 10 in the morning Kerry Johnson went to the Mardi Gras Casino in the town of Nitro, Virginia. He remained at the blackjack table until 3pm. He left a $25 chip on the gaming table so that the dealer would keep his place for him although it wasn’t a lucky spot as he built up such losses that he ran out of money. So Kerry Johnson left the blackjack table to go rob a bank. He went to the City National Bank wearing a white scarf around his neck, a baseball cap and a red t-shirt printed with WV for West Virginia University. He gave the bank teller a note saying that he had a bomb and a gun and to hand him money. The teller did as asked while the security cameras filmed the whole amateur hold-up. Driving off in a Mazda Miata, the Sunday gangster headed straight back to his seat in the casino to play blackjack for free. He stayed there until 4.30 before going home.

So amateur the case was easily solved

The police inquiry went very quickly because the car was easily identified based on security camera images. The police just picked up the player-robber at his home where he was sleeping and where they found incriminating evidence. They found the white scarf, the cap, the red t-shirt with WV on it and to top it all, the note asking for the money. The police also found a large sum of money matching the stolen notes and dollars at the Mardi Gras Casino blackjack table.

Even with all this evidence against him, Kerry Johnson claimed he had nothing to do with the hold-up. With bail at 50 000 dollars he is facing up to 20 years in prison. We don’t know from this unusual story whether for next Mardi Gras he is going to dress up as a blackjack dealer or a policeman! To be continued…