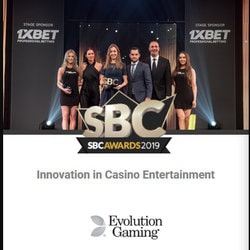 After the EGR Operator Awards, Evolution Gaming has just been rewarded at the Sports Betting Community (SBC) Awards. The live casino games developer received a prize for its great sense of innovation.

In its category, the company which has increased its successful creations over the year, beat 11 other developers.

With this award it confirms once more its position as a leader in the live dealer casino games sector.

The Sport Betting Awards (SBA) are a major event in the iGaming industry. Every year they reward online casino software developers in 5 different categories. In 1919 they took place on the 3rd of December in the Bettersea Evolution exhibition centre.

During the ceremony, Evolution Gaming won in the “Innovation in Casino entertainment” category, which honours the developer who has stood out for the innovative characteristics of its products.

Among the games that contributed to the Riga based developer winning this prize are its new creations based on a format inspired by television programmes. These include Deal or No Deal, Dream Catcher,  Lightning Roulette , Lightning Dice and Monopoly Live.

All these different games incorporate many exceptional elements that guarantee a really unique gaming experience: increased realism, special effects, RNG draws etc. Eleven other developers were also in the running for this prize during the SBC Awards 2019.

Evolution Gaming has a long history of winning international prizes. Just over the past two years, the company has multiplied its prizes at major events. One of these is the prize for the best game of the year 2019 won by its Live Monopoly game at the EGF Operator Awards.

The ceremony was organised in the Grosvenor House hotel-casino and at it, Evolution Gaming kept the title that it had won the previous year. At the beginning of the year at the Global Gaming Awards, it was awarded the prize for the best online casino supplier. At each of these award ceremonies, the winner demonstrated its supremacy in the sector much to the chagrin of its competitors.

These prizes are proof that Evolution Gaming offers players a quality product. It’s also the reason why the list of online casinos offering its games on their platforms is getting longer and longer. This is good news for online players who can easily access the developer’s excellent products.

Just a reminder that along with its new games in the format of TV programmes, Evolution Gaming also offers a very wide range of live dealer tables. There are several versions of baccarat, roulette, blackjack and poker, each one more captivating than the next and with wager levels to suit every budget.