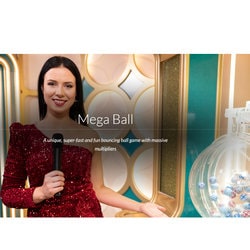 At ICE London, Evolution Gaming showcased twelve new games that will continue to be released in stages over the coming months. Lightning Baccarat, Dragon Tiger, and Football Studio have already been rolled out, and now it’s time for Mega Ball. This is a lucky numbers game which is like a hybrid lottery, bingo, and keno game all in one, with a stunning mega ball multiplier added for even bigger wins. It’s another title that joins Evolution’s growing portfolio of game show-themed live casino games.

Like all the best games, Mega Ball is delightfully easy to play. To start things off, all the player needs to do is select how many cards they want to play – the options range from 1 up to 200. After that, decide on the value of the cards, and the game will begin.

There are 51 multi-coloured balls housed within a custom-made ball drawing machine. 20 balls are drawn in quick succession, and the numbers that match those on your cards are automatically chalked off. A card is a 5-by-5 grid, with 25 numbers. Winning lines can be formed vertically, horizontally, and diagonally.

As the 20 balls are drawn, the user-interface rearranges the player’s cards so those that are nearest to forming a winning line are placed at the top. It also highlights the number(s) you need and the win value if you manage to land them.

After the 20th ball is drawn, attention switches to the multiplier wheel. It contains a range of multipliers starting at 5x, up to the maximum of 100x. The final Mega Ball is drawn, and this has the win multiplier value attached. If the Mega Ball completes a win line for the player, the winnings are then multiplied accordingly.

It is possible to win 1,000,000 times your card value if you get the maximum multiplier. However, it’s worth noting that Evolution Gaming has a maximum win cap of 500,000 for all of its games.

What Other Games will Evolution be Releasing?

This company never stands still. It is always looking to innovate and to create games that are appealing to live casino players. Another game that is soon to be released is Live Instant Roulette, which has 12 synchronised wheels to make it the fastest live roulette game ever developed. Also waiting in the wings is Live Craps, Power Blackjack, and a fun money wheel game called Crazy Time.