Marina Bay Sands in Singapore Caught Up In DOJ Investigation 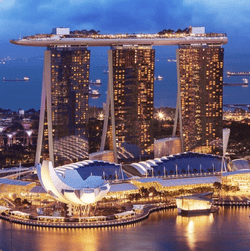 Singapore has a reputation for being a corruption-free and safe place to do business in Asia, and that reputation extends to its casinos. However, The Marina Bay Sands, the city’s most iconic casino, has found itself caught up in a money-laundering probe that threatens the city’s hard-won reputation for transparency and crime-free gambling.

The casino, owned by Las Vegas Sands, is part of an investigation by the US Justice Department. Although the probe has not reached any conclusions to date, it is seen as somewhat of an emergency by Singapore authorities, who have significantly sped up efforts to bring more transparency to its gambling market.

In response to the scandal, Singapore’s Casino Regulatory Authority (CRA) made a statement indicating that it, along with other government agencies, was going to review the current laws, called the Casino Control Act, to make sure it’s in alignment with the standards set by the Financial Action Task Force.

As things stand, deposits of more than SGD $5k (£2,850) trigger automatic Know Your Customer checks. However, it’s understood that this is higher than the FATF has recommended previously. It recommends KYC checks at deposit transactions of half that value.

Las Vegas Sands has paid numerous multi-million dollar fines for previous infractions and has faced accusations of allowing known criminals to gamble at its casinos.

The Importance of Regulated Casinos

That’s why we always recommend licensed casinos with UKGC licenses for UK players. Sites like PlayFrank and Dream Vegas have undergone rigorous testing procedures and adhere to anti-money laundering and KYC regulations. This is what helps make the UK online gambling market one of the safest in the world.

What Will Happen to the Marina Bay Sands?

It’s important to note that the DOJ’s investigation has not yet reached any conclusions. However, it’s safe to say that this does not pose an existential threat to Singapore’s iconic casino. Instead, it is likely to receive significant negative press, substantial fines, and it is possible that individuals involved will face criminal charges if the findings are that wrongdoing has occurred. We will keep you updated as this story develops.