Evolution Wins Award for Innovation for its First Person Games 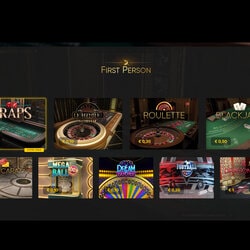 Much of our industry news centres around the innovative and fast-moving company Evolution. Yet again, we have a story related to this live gaming company’s success. Evolution has won another award related to its “First Person” range of games. On July 6th, it won an award for innovation at the EGR B2B Awards.

This award recognized Evolution’s innovation in pushing the industry forward once again with its range of RNG First Person games.

Evolution is widely known as the leader in live casino games. However, in the past year, it ventured into RNG “First Person” casino games as well. So far, Evolution has launched the following games in this range.

The First Person games combine elements of RNG and live casino gaming. Tables and game elements are generated by software while the games are still hosted and run by live dealers in many cases. These games are a world first, which is one of the reasons Evolution won an innovation award for them.

The award for innovation wasn’t the only award the Evolution Group picked up this year. At the end of June, it also scooped awards for Best Online Casino Supplier and its NetEnt and Red Tiger brands both won Top Product awards.

Evolution acquired NetEnt in 2020, gaining control of one of the top casino brands and its huge library of slot machines and other games. NetEnt still operates as its own distinct brand but is ultimately a part of the Evolution Group. Evolution has already created innovative new games like Gonzo’s Treasure Hunt based on some of NetEnt’s trademarks.

Players who are interested in trying these award-winning games can do so at several safe, regulated, and licensed live casinos. We recommend UK players try them at Mr Green or 32Red. Both casinos gained top-rated status from our review team when we assessed them recently.

American players from several states with legal, regulated gaming can also play Evolution casino games. Players from New Jersey, Michigan, Pennsylvania, and several other states can play them at legal American casinos based in their respective states. Americans not based in such states can play alternative live dealer games on offshore sites like Red Dog Casino.