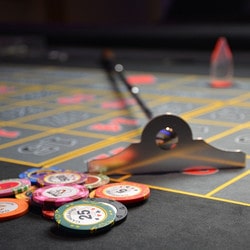 In July 2016, a gambler of Italian origin stole a pile of chips at one of the Monte-Carlo roulette tables. Just over two years after the event, the Monaco court has sentenced him to two years in prison. Live Dealers Casino brings you this unusual story of how an Italian player managed to get his hands on more than €1100 in record time at a roulette table in the Monte Carlo Casino.

While some gamblers plan ever more ingenious ways to beat or defraud casinos, others don’t go to too much trouble and use the most classic methods known. This was the case for this regular in the Monte-Carlo Casino, who, on the 20th of July 2016, decided to just steal the chips from one of the casino’s tables. Well versed in the palming method, he succeeded in stealing ten €100 chips and 4 worth €25 each. This came to €1 100 which the dishonest player pocketed in the space of 40 minutes before disappearing. He had obviously prepared well because he managed to by pass the dealers’ watchfulness and the casino’s security system; the loss was only noticed long after he had gone.

Not a very bright criminal

Even though he had managed to slip through the prestigious Monaco casino’s security system, he hadn’t obviously thought out what would happen next. Just like all good casinos, the Monte-Carlo Casino has a very modern videosurveillance system. So it’s difficult to imagine that a robbery like this could escape detection by such a system. Also, access to the Societe des Bains de Mer casinos’ Salons Prives is only on presentation of ID. So the perpetrator was quickly unmasked and his personal details were swiftly given to the police.

A hard to find repeat offender

The Monte Carlo Casino robber didn’t have a lot in the way of personal details, the copy of his ID card didn’t give much information. Although it did show that the offender was from Turin and known to the Italian police. He had quite a criminal record with 7 prison sentences for various crimes: fraud, robbery, receiving stolen goods, drug traffiking and writing false cheques. Between 1984 and 2011, he had been in court many times. However, apart from this information on his past, the police didn’t have much knowledge of his current situation. He had no job or no known address. So it took the Monaco police more than a year to locate the robber.

That day, it was no surprise that the accused didn’t turn up in court but that didn’t stop justice being done. As demanded by the public prosecutor, the court sentenced him to two years in prison.