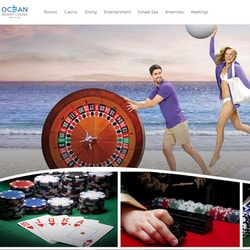 On the 28th of June, Atlantic City experienced two events as it hasn’t had for years. After a long period of recession marked by the closure of several of its casinos, the historic capital of the US East coast casinos, is again the scene of the opening of two casinos: Hard Rock Atlantic City and Ocean Resort Casino. Both have risen from the ashes of old casinos closed a few years ago, these two new casinos seem to mark the beginning of a new era for the city.

Opened in 1990, the Trump Taj Mahal was one of Atlantic City’s leading casinos just a few years ago. With its construction costs estimated to be 1 billion dollars and its Indian inspired, ostentatiously luxurious decor, in the style of its owner, Donald Trump, former casino magnat and the current President of the United States. However this didn’t protect it from being hit badly by the fall out from the 2008 recession. In October 2016, after longterm financial difficulties, the Trump Taj Mahal closed its doors for good.

But while most investors were fleeing New Jersey, the Hard Rock International group decided to take over the casino for 320 million dollars. Just under two years and an investment of over 500 million dollars later, the Hard Rock Hotel & Casino Atlantic City officially opened to the public on the 28th of June. Completely changed, the former Trump Taj Mahal has completely abandoned the Indian look, the huge elephants and its expensive tapestries for a much more playful modern rock n’ roll theme, which is part of the new owners’ casino franchise.

The other main victim of the 2008 recession, the Revel Resort and Casino had to close down in 2014 following major financial problems. Initially re-sold for only $82 million in 2015, the casino was finally taken over by the AC Ocean Walk group last January for $200 million after a first failed attempt at re-opening. It finally re-opened last June 28th with the name Ocean Resort Casino.

Behind the name change, there’s also a change in the casino’s business direction. Despite the over 2 500 slot machines and 120 gaming tables inherited from Revel, the new management team has decided to concentrate in particular on the 700 square metres organised specifically for sports betting. As part of this, last May, the casino signed a partnership with the English bookmaker, William Hill which was a guest of honour at the official opening.

The two casinos, in their own way, pulled out all the stops to celebrate their official openings. Unusually, both opened on the same day and in advance of the official programme. Having got the authorisation from the Commission, both opened early on Wednesday 27th instead of on the official date of the 28th. An opportunity for both teams to put on a great show and to let visitors see it all. Over both days, visitors were treated to concerts, fireworks, acrobatic and other shows and some were even able to take away their first winnings in these “new” Atlantic City casinos.

For the city that lost 5 of its 12 casinos, it’s a strong signal for those who thought it was a lost cause. Let’s hope that the enthusiasm of the moment will carry on and that investors will once more flock to the Jersey coast.