Skip to content
Home/Casino, Casinos USA/Unusual flood in a Florida land based casino

Unusual flood in a Florida land based casino 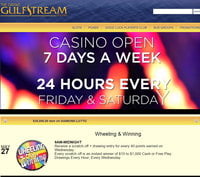 The Gulfstream Racing & Casino Park at Hallandale Beach in Florida is a well known venue for its size and the diversity of its business. This complex includes a real race track where horse racing fans meet to bet on several horses. But it’s also a venue that is much sought after by gamblers with 850 slot machines, poker rooms as well as electronic gaming tables.

At the entrance to the Gulfstream Racing & Casino Park, there is a giant 4 metre high aquarium which needs 57 000 litres of water. This unusual attraction hit the headlines on Sunday the 2nd of September last when the aquarium suddenly cracked. At lunch time, clients and staff were surprised by a deafening noise and were hit by an impressive wave of almost 40 000 litres of water. In just two minutes the aquarium was almost empty but miraculously about 10 000 litres of water remained in what was left of the aquarium and this saved the lives of many fish including sharks.
Luckily, no one was injured which is surprising given the violence of this very rare accident. The director of the establishment was amazed that such an accident could happen but said he was relieved that there were no victims or injuries. Since the aquarium was installed in 2006, no leaks were found and inspections were regularly carried out. The cause will be known when the conclusions of the investigation are published.

Big Lost for the casino

The establishment had to close down while the venue was dried out and renovated. This caused the casino great harm as it lost $140 000 daily without counting the equipment that needs to be replaced.

By wishing to stand out from the competition by installing ever more impressive attractions, casinos have seen that no one is beyond the risk of an accident. It is most likely that such attractions will in future have infallible security.