Paddy Power, William Hill and the power of advertising 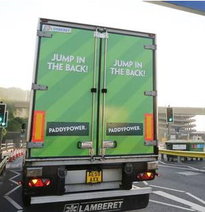 For many companies publicity is publicity and often it doesn’t matter if it’s positive or negative once the company’s name or product is being talked about. Recently Paddy Power and William Hill Casino the leading land based and internet gambling companies, which also run online live dealer casinos, were both in the news due to the negative effects of their advertising campaigns.

William Hill, one of the foremost betting companies in the United Kingdom was reprimanded recently by the Advertising Standards Authority because of complaints about two of its advertisement campaigns. Before Princess Charlotte, the Queen’s latest grandchild was born, William Hill Casino ran a campaign to encourage people to bet on the sex of the child. The use of pictures of young people or children is forbidden by the British advertising code. In its campaigns to bet on the Royal baby’s sex, William Hill had a truck with two huge teddy bears travelling around the English capital and the Advertising Standards Authority warned the company that the use of items that could appeal to children was prohibited in a gambling promotion. The same criticism was made of William Hill’s advertisement for betting on the Masters golf tournament because it had a photo of a young girl jumping up holding a golf club. The company was told by the Advertising Standards Authority that in the future it must not use pictures of young people or objects in gambling campaigns that could appeal to young people.

Paddy Power another leading bookmaker has attracted controversy over the years with its advertising campaigns. Its recent campaign to promote the company has been accused of undermining the situation faced by migrants in the French city of Calais who try to enter the United Kingdom by jumping into trucks. A spokesperson for Paddy Power has said that the company wasn’t making a statement on the migrant question but was just making a joke about the nationality issues surrounding some players who play for Britain. Paddy Power’s advertisement on the side of the truck reads: “Immigrants, jump in the back (but only if you’re good at sport)”. The statement is alongside pictures of various sports people who play for Britain but who were born in other countries. The company insists that the campaign is based on humour surrounding nationality and not on the migrant situation.

Both William Hill and Paddy Power have online casinos with live dealer sections. William Hill Casino has been online for fifteen years. The live casino runs on Evolution Gaming software and offers players the opportunity to play live with dealers filmed by web cameras in a studio within a casino in Riga in Lithuania. The live casino’s clients can play live roulette, blackjack, baccarat and Texas Hold’em.Paddy Power’s online casino has been in operation for 11 years and clients can play live blackjack, baccarat, roulette and casino Texas Hold’em with live dealers. The live casino runs on a Playtech platform and is streamed from a casino studio in Lithuania.
By admin|2015-07-13T07:43:46+00:00July 13th, 2015|Paddy Power, William Hill Casino|0 Comments