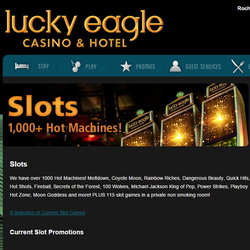 Veronica Castillo won’t forget her visit to the Lucky Eagle Casino in Rochester in the north-west of the United States. The slot machine player thought she’d become a millionaire when she saw the fabulous amount of the equivalent of 8 million dollars displayed.  Veronica Castillo thought that the “Jurassic riches” slot machine had made her very rich, which it had but only unofficially and for a few minutes because the slot had a computer bug, an affair that may finish before a judge.

From 8 million to an offer of 80 dollars

An avid slot machine player, Veronica Castillo went to the Lucky Eagle Casino in Rochester last weekend and played at a slot machine. After a few minutes the slot machine displayed the amount of 8 million dollars. It goes without saying that this thought filled her head and the lucky player started to dream about what she could do with this wonderful present as if Christmas had come early. The slot machine player was delighted with “Jurassic riches” which was going to change her whole life after just a few spins of the wheels. She went to the cashier with visions of sipping champagne with her seven figure cheque in her hands only to be told by the manager that there had been a bug in the slot machine. The maximum amount that the slot was able to provide was $18,500. This was far from the 8 million that the player thought that she had won and even the 80 dollars she was given as a consolation prize was less than the 100 dollars that she had played.

The player was offered a free weekend in the casino’s hotel and the casino manager claimed that this was the first time that this had happened in his 20 year career. An inquiry was launched into the slot machine computer bug. Veronica Castillo queried the technical problem and made a claim against the American casino. She has even stated that it’s fraud and it’s quite likely that it could all end up in court. Computer bugs are a major fear for land based and online casinos. After such an incident the casino’s image can suffer and there could be a “bad buzz” on social networks. It’s easy to understand the player’s bitterness who thought she was a euro millionaire and who was refused her winnings under the pretext that the huge prize was the result of a computer bug.

As far as we know, such an incident has never arisen in an online casino but software could also be affected by this type of bug. Lucky31 Casino which is casino specialising in Netent and Betsoft slot machines (the most reliable slots on the market) has never been in the situation of having their players face such disappointment. Veronica Castillo won’t live the high life and it’s not known if she has accepted the casino’s offer of a free weekend.