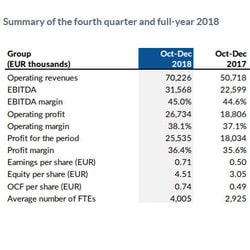 The live dealer casino games developer Evolution Gaming has published some figures for the year 2018. These are amazing. Very few online casino developers have known such growth. Income for 2018 is 245.4 million dollars which is an increase of 38% compared to 2017. For just the last quarter of 2018, Evolution Gaming’s income was 70,226 million dollars. It’s a great success story of a developer who is well known to players of traditional games online. The largest online casinos have games from this developer along with games from other developers to offer a complete range.

Evolution Gaming is the most innovative live dealer developer of its generation. A quick look at its lobby clearly shows this. Lightning Roulette, Immersive Roulette,  Baccarat Squeeze, Baccarat Control Squeeze, Blackjack Party and Infinite Blackjack  are just a few of its innovations. Its aim is to bring more and more originality to live roulette, blackjack and baccarat tables and Evolution Gaming’s method works perfectly because there are increasing numbers of online players betting at its tables.

For example, during ICE 2019, Evolution Gaming presented no less than 10 new games in particular Lightning Dice, which is based on Lightning Roulette but with the possibility of winning up to 1000 times one’s bet. There is also Free Bet Blackjack, Super Sic Bo (dice games), Side Bet City (a poker game), 2 hand Casino Hold’em as well as  First Person Dream Catcher and First Person Lightning Roulette.

Many more Evolution Gaming online casinos are appearing. Some virtual casinos replace other developers that they used with this one (like Stakes for example) while others add Evolution Gaming games to their platform along side their existing live games.

A group in full expansion

On the stock market, the Swedish Evolution Gaming Group AB shares are doing well with a share valued at 700 SEK. So the future for the leading live table and card games developer’s figures is looking good. 2019 should be a good year. To be continued…..