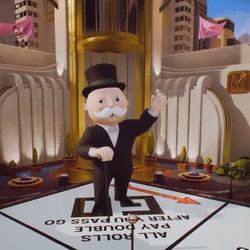 Every year the main companies in the gaming world meet in London at the ICE Convention. Some are land based casinos shopping for slot machines others are online casinos come to discover the latest new games. It’s a way for gaming developers to present their latest discoveries. This year, without doubt, the product that made the most waves is Evolution Gaming’s Wheel of Fortune Monopoly Live. Evolution Gaming is innovating once again by launching in partnership with the Hasbro group, a Monopoly game that is played live from a studio.

Last year, this developer caused a sensation with Lightning Roulette which was in the limelight. Since it was launched, it has become the developer’s leading roulette table. This year with the success of Dream Catcher, Evolution Gaming has outdone itself with 3D animations in Monopoly Live. The result is breath taking!

Live Dealers Casino brings you everything on the Monopoly Live game which is half virtual- half real. In all, pure pleasure for the eyes and for entertainment value!

A virtual Monopoly game in a real studio

Everyone knows the game of Monopoly, one of the most sold board games in the world. Mr. Monopoly with his famous white moustache, his hat and his black walking stick. This month, Evolution Gaming launched Monopoly Live which is a Wheel of Fortune with 54 zones of 7 different numbers or figurines. This wheel is based in a studio and a host provides the entertainment. He spins the wheel and announces the winning numbers.

As regards winnings, the ratios are equal to the numbers bet. For example, number 1 gives once the bet, 2 is worth twice the bet, 5  five times  and 10 ten times its wager. It’s with the figurines that the game becomes interesting and stands out from other games. When the pointer stops on the Chance segment, the prize money is random with a multiplier.

The 2 Rolls and 4 Rolls are the segments that bring in the most. In fact the prizes could go up to €500 000. When the pointer stops on one of these two segments, the game moves from the real studio to the Monopoly game that everyone knows with the names of its streets, avenues, train stations and its famous prison square. The die are thrown randomly and Mr. Monopoly goes from square to square. With multipliers, players might reach the jackpot.

This game is entertaining because one plays on a traditional wheel of fortune filmed live from a studio. When the pointer stops on the 2 Rolls and 4 Rolls squares, the game enters a new dimension.  It moves from a live game to a virtual game. The 3D animation is exceptional and one sees the New York decor with its many tall buildings. The quality of the images and the rapid streaming are of high quality. Evolution Gaming is a master of allying real and virtual gaming. Monopoly Live is the latest example of this and Lightning Roulette is also a roulette table that links a live dealer game  from a studio and a random game.

Evolution Gaming is outstripping its competitors and is constantly imposing itself as THE leader of live gaming. If you don’t already know Monopoly Live, this game will delight you. It’s already among Evolution Gaming’s best games, only a few days after its launch.