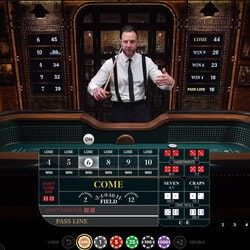 Evolution has officially launched Craps Live, the first live craps game online. The Swedish live gaming specialist is the first company to create a live dealer craps game. It’s available in all countries and states where Evolution is licensed to offer games.

As well as offering a unique live gaming experience that’s unavailable with other companies, the game offers several extra features that will be of great interest to potential players.

This is one of multiple unique and interesting live casino firsts released by Evolution this year. Crazy Time, like Live Craps, was another first released in 2020, proving that Evolution has no intention of slowing down its pace of innovation in the live casino games sector.

Evolution Chief Product Officer, Todd Haushalter, noted that the release completes Evolution’s game portfolio. Does this mean they won’t release any further games? Certainly not. What it does mean is that you can now play every game with Evolution online that you could find in a land based casino, including blackjack, baccarat, roulette, sic bo, and now craps.

“The team has done a phenomenal job and we now have a fantastic finished product that I know will thrill Craps enthusiasts in the US, Europe and beyond, as well as attracting legions of new fans,” Haushalter said.

Where Can You Play Live Casino Craps by Evolution?

Designing and operating a live dealer craps game can’t be an easy task, but if anyone can pull it off it’s the world’s leading live games firm. We look forward to seeing how this game performs and encourage you to give it a try today.