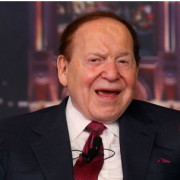 Sheldon Adelson owner of Las Vegas Sands and several land based casinos in the United States, Singapore and Macau is continuing his campaign to have online gambling declared illegal in the United States. He has made the headlines regularly with his highly financed efforts to reinstate the 1961 Wire Act that was interpreted widely as banning online gambling. The 1961 Wire Act states that “Whoever being engaged in the business of betting or wagering knowingly uses a wire communication facility for the transmission in interstate or foreign commerce of bets or wagers or information assisting in the placing of bets or wagers on any sporting event or contest, or for the transmission of a wire communication which entitles the recipient to receive money or credit as a result of bets or wagers, or for information assisting in the placing of bets or wagers, shall be fined under this title or imprisoned not more than two years, or both.”

Clarification of the Wire Act

The United States Department of Justice released a legal opinion in September 2011 stating that: “interstate transmissions of wire communications that do not relate to a ‘sporting event or contest’ fall outside the reach of the Wire Act.” This was taken by online casino operators to mean that online gambling was no longer prohibited and many states made moves to legalise online casinos within their states. Of the several states to debate the possible introduction of legislation to make online casinos legal only three got to the point of actually passing the necessary laws. Online casinos are legal in Nevada, New Jersey and Delaware but only intra state online gambling is allowed. This is what Sheldon Adelson objects to. It has been reported that he is opposed to online casinos on moral grounds and has been quoted as saying that the effects of gambling in online casinos are worse than gambling in land based casinos.

Sheldon’s latest effort to have the 1961 Wire Act reinstated took place last week when the Republican Jason Chaffetz reintroduced the anti -online gambling bill, the Restoration of America’s Wire Act. If passed this bill would put an end to online casinos within the states of New Jersey, Nevada and Delaware and prevent their legalisation in any other states. The bill would repeal the 2011 Department of Justice legal opinion allowing online gambling. Sheldon Adelson has made multi -million dollar donations to the Republican Party. Last December, Adelson was disappointed when the bill was not added to legislation to be debated by Congress before the holidays. It now remains to be seen whether the Republican controlled Congress will pass this bill backed by a major party supporter.