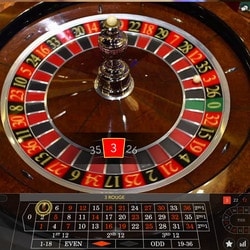 Some roulette players have plenty of ideas for stealing chips. This is true for an Italian man, who tried “palming” , a technique which involves placing a chip on the roulette mat and picking up other ones. This player put double sided tape on his palm to steal chips. He succeeded in stealing €525 with this technique before the fraud was spotted by the dealer in the Sun Casino Monaco and by the security cameras.

Live Dealers Casino tells you more about this attempt to cheat which took place in one of the Société des Bains de Mer (SBM) casinos and ways to avoid  the problems of stealing chips.

An Italian national, who was stealing chips using the “palming “ technique, was stopped by the dealer and security cameras. He managed, however, to steal €525 before being caught in possession of the chips. This old trick still worked for a while at one of the Sun Casino in Monaco’s roulette tables. The fifty year old was arrested by the casino’s security staff. He was sentenced to two months in prison, suspended, by a court in Monaco. In his defence, he told the judge that he was addicted to gambling and that he was trying to catch up having lost several games. However, the construction worker from Catane had €410 in his pockets. These excuses didn’t soften the judge’s attitude and he was given a suspended sentence and banned from visiting casinos in Monaco.

How did a player who is banned from casinos all over Europe, manage to play in the Sun Casino, Monaco? This is the question that the judge asked himself. The answer is quite simple: Monegasque casinos don’t check players’ identity at the entrance to casinos. So it’s easy for players to enter SBM casinos even for banned players. This player addicted to roulette also has precedents in Italy and Germany. So if he sets foot again in a casino in Monaco, he’ll go straight to prison.

The SBM is going to have to review its casino entry verification system so that banned players can’t gamble and so that this won’t happen again.