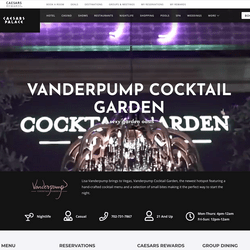 One of the most iconic casinos in Las Vegas, Caesars Palace, is set to get a multi-million dollar makeover. The already opulent and stylish casino will see new funds worth millions injected to modernize several areas, including its famous entrance, in time for New Years Eve 2021.

Ever since it opened its doors in 1966, Caesars Palace has attracted millions of gamblers from all over the world. Its fountains and Roman-style halls have featured in movies and have dazzled endless casino players in Las Vegas.

However, beautiful places don’t stay that way without maintenance and upgrades. Caesars Entertainment, which owns and operates the property, will spend millions to upgrade the entrance, lobby bar, plus its casino floor and table games. The exact figures to be spent are as yet unknown, but they are set to go into the millions.

So, how will casino players get in and out while the work is ongoing? According to the latest known information, players can still access the casino through the doors next to the Vanderpump Cocktail Garden.

As well as modernization and new pedestrian tunnels to bring guests into the resort, the infamous three goddesses in the lobby will be replaced by a 15-foot tall statue of Augustus Caesar himself. The resort will also remove some tables from the floor and will build two new gaming areas.

In a related story, Caesars Entertainment is also building a new casino in Nebraska. It will cost $75 million and will open at the end of 2022.

After a tough year in 2020, things are looking up for American casino operators both online and offline. We’ve already reported some of the quarterly numbers coming out of states like New Jersey, and they’re mathematical proof that players are returning to casino resorts in droves.

While casinos like Caesars Palace are unmissable for players in Las Vegas, the majority of Americans still don’t have access to a casino nearby. It’s often a long drive to Indian reservations or other states to access high-quality casino games.

Thankfully, all Americans can access live casino card and table games like blackjack, roulette, and baccarat at offshore casinos like El Royale Casino. Real dealers host these games in dedicated gaming studios, and they’re streamed straight to player’s devices via state of the art cameras.

While a trip to Caesars Palace would be nice, you won’t have to travel to Las Vegas to get in on some action. Visit El Royale Casino today!