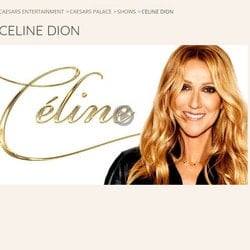 Celine Dion fans who were hoping to see her on stage are greatly disappointed. The singer from Quebec is suffering from a hearing problem (Patulous Eustchian Tube) and so can’t sing correctly. So she has cancelled her concerts from the 27 March to the 18 April, while she “undergoes a minimally invasive surgical intervention”. Wth this ear problem, Celine Dion can’t sing correctly and has had no choice but to cancel for almost 3 weeks, all the concerts planned at The Collosseum at Caesars Palace Casino. Fans who wanted to celebrate the Quebec singers 50th birthday on the 30 March 2018 will have to wait until the end of April to see the star back on the stage.

Celine Dion’s programme for the month of March at The Colosseum at Caesars Palace was to have been full. The singer of “My Heart Will Go On “should have been on stage the 27,28,30 and 31 of March and then on the 3,4,6,7.10,11,13,14, 17 and finally the 18 of April. The drops that she was using to treat the symptoms unfortunately aren’t working anymore. This means that she’ll have to undergo surgery. Due to this, the singer from Quebec has had to cancel her concerts in March and until the 18 of April in the huge Caesars Palace Casino concert hall that can hold over 4300 people!

Celine Dion is one of Caesars Palace Casino’s resident artists. Since 2003, Celine Dion has been performing in this prestigious Las Vegas casino’s concert hall. In 2003 she unveiled her show “A New Day” and it ran until 2007. Since 2011, she is constantly on stage surrounded by her 31 musicians and gives concerts one after the other to the delight of her fans who come from all over the world. Elton John and Rod Stewart are also “permanent” artists in the Colosseum at Caesars Palace Casino.

Contrary to what one might think, Caesars Palace isn’t just a casino (this is also true for the other Sin City casinos- Editor’s note). It certainly does have thousands of slot machines and hundreds of Blackjack, Craps, Roulette, Baccarat, Pai Gow TIles, Pai Gow Poker, Free Bet Blackjack, Three Card Poker, High Card Flush and many other tables. So as regards table and card games, Caesars Palace in the heart of The Strip, has many attractions. Be this as it may, entertainment is a major source of income for Las Vegs casinos. This explains why the casinos offer juicy contracts to artists such as Lady Gaga, who has signed with MGM Casino Las Vegas and who will make over 100 million dollars!

Celine Dion’s fans will just have to be patient until she is well again. We’d like here to wish this exceptional singer a speedy recovery.