Marina Bay Sands Singapore to get a fourth tower 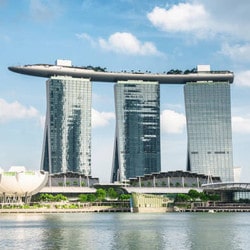 Sheldon Adelson always envisages his hotels larger and he proves this once more with the Marina Bay Sands. So the hotel casino could be enlarged with a fourth tower. For those who have never been to Singapore it’s impossible to miss the Marina Bay Sands’ three towers. They can be seen for kilometres around and the architecture is impressive. This hotel is known worldwide for its 150 metre long infinity pool on the 55th floor.

George Tanasijevich, president and director of the Marina Bay Sands Pte Ltd, has given some details on the construction of this new tower: no casino games are planned. The Las Vegas Sands       intends to build this tower just to have more rooms and suites.

The Singapore government has given the Marina Bay Sands the green light to build a fourth tower.  Marina Bay Sands Pte Ltd will spend the sum of 4.5 billion Singapore dollars which is 2.94 billion euros. This investment will add more than 1000 bedrooms and suites. However, this new tower won’t have any casino games. It’s just to increase the number of hotel rooms to fulfill an ever increasing demand. With a rate of occupation varying from 94% to 99%, the Marina Bay Sands is often full. This new tour will prevent this and will welcome tourists from all over the world.

The Israeli-Canadian, Moshe Safdie, director of Safdie Architects, will be in charge of the construction of this amazing hotel. His architect cabinet will build the fourth tower. His work can be found all over the world in Singapore, Canada, the United States, Israel, Ecuador, India, Sri Lanka, Turkey and China.

Even though this tower won’t be used for cash games, the Marina Bay Sands has the permission of the Singapore government to increase its gaming area. So it will be able to increase the gaming area by 13% and will then have reached the maximum size of 17 000 square metres. The Resorts World Sentosa Singapore is going to do the same. Singapore only has two casinos : the Marina Bay Sands and Resorts World Sentosa and just the two of them do almost better than all of the Las Vegas Casinos together. In 2011, the revenue in these two casinos was more than the casinos in Las Vegas.

Now, the Singapore casinos are in third place as international gaming capitals behind Macau and Las Vegas. With the arrival of casinos in Japan, this list could be altered. According to experts, Japan’s casinos could bring in more revenue than Macau’s casinos and then Singapore would be demoted to fourth place in the world rankings. To be continued…..