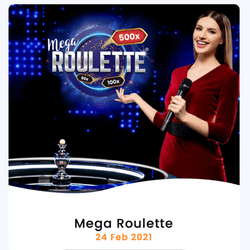 We’ve been covering Pragmatic Play Live more and more as of late. As the company grows and carves out a place for itself at some of the top live casinos online, we want to bring you the latest news and updates about its world-class live games.

So, what is Mega Roulette all about and when will it be officially released? That’s what we’re going to cover here.

Experienced players may think this game sounds a lot like the Lightning and Quantum Roulette games already on the market. That’s correct; it’s designed to be a competitor to these two highly popular live roulette games.

Victor Arias, Pragmatic’s VP on Latin America, had this to say: “Its engaging gameplay and phenomenal win potential makes the game stand out even among our own portfolio, and we’re delighted with it. We can’t wait to see how it’s received by live casino fans across the continent.”

Pragmatic Play has previously released two other games under the “Mega” brand. They were well received by live casino players. These games included:

As you can see, the “Mega” games from Pragmatic Play are all about multipliers. There are some seriously big wins available. You can play these games at Mr Green live casino now.

We expect more games to be released in the Mega Series from Pragmatic throughout 2021 and beyond. We’ll be the first to let you know when they come online. As the competition heats up in live casino gaming, you can be sure Pragmatic Play won’t be left behind.