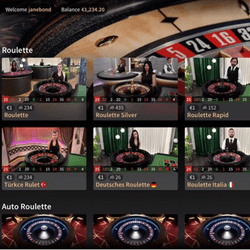 Swedish-based NetEnt has established itself as a market leader in live casino games, and it recently announced a new game lobby to boost player engagement. These are not in-game changes, but rather are changes to how the games are presented to players in the lobby at NetEnt live casinos.

The new NetEnt lobby will display winning numbers, available seats, the number of current players, and bet limits, among other useful information to help players make a decision about what to play. The new interface will also allow operators to customize how the games are presented if they choose to do so. Casinos can also opt for the generic “plug-and-play” lobby offering standard NetEnt live dealer games.

NetEnt Live director Andres Rengifo called the lobby “a vital element to get right.” He elaborated that NetEnt believes it has created a “perfect” game lobby.

While NetEnt is at the front of the pack when it comes to video slots, it can’t be said to be number one in live gaming. That prestigious title still belongs to Evolution Gaming for now. However, while many other operators focus on releasing a raft of new games, this new game lobby is a sign that NetEnt is hoping to grow its revenues via enhanced player engagement.

NetEnt currently offers live dealer blackjack, roulette, and baccarat. You can play these games at Mr Green and lots of other safe, approved casinos such as William Hill. We have a full Mr Green review with a complete list of games on this list if you’re interested in checking it out.

Will live games continue to dominate throughout 2020?

In earlier reports, we noted that live games companies were reaping the benefits of casino lockdowns across the world. Evolution Gaming reported increased revenues as players from around the world find their favourite casinos shut by government decree.

However, in many US states, and in some countries, casinos are cautiously starting to open their doors again, albeit at reduced capacity in most places. Will live casinos continue to dominate throughout 2020, or will the reopening of land casinos mean the record-breaking revenues reported by some firms were a one-quarter wonder?

Time will tell, but some experts have predicted that the exposure to live games and the fear among many gamblers about returning to communal environments such as casinos will lead to increased revenues for live game companies on a permanent basis. Whatever happens, NetEnt will be ready to capitalize with its new interactive lobby.