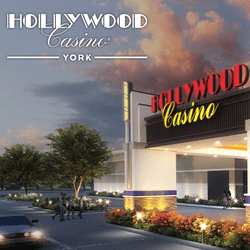 We last reported on Pennsylvania when the Keystone State opened an Evolution live casino studio for its thriving iGaming sector. Today, we’re reporting on a new land casino in Pennsylvania. The Hollywood York Casino is 80,000 square feet and is operated by Penn National. It’s the operator’s third land casino in the state, and it just had a hugely successful grand opening day.

The grand opening of the new Pennsylvania casino was on August 12th. By all reports, it was a rip-roaring success with long lines of eager players waiting to get in. At one point, the line was so long that casino staff had to bring water out to the players waiting in the heat.

Here are a few need-to-know facts about the casino:

Cashless payments are becoming a trend in casinos all across the world. It will allow innovations like chip purchases and redemptions at the casino table. This will eliminate the need to cash in chips at a casino cage or to carry chips between tables.

PA Players Are Spoiled for Choice

Pennsylvania casino players have some of the best options in the country these days. Not only does the opening of Hollywood York Casino give them access to yet another world-class land casino, but PA was one of the first states to recognize and capitalize on the legal iGaming revolution sweeping the USA.

Pennsylvanians who prefer playing live casino games online have access to a suite of games from the award-winning live gaming firm Evolution. Big names like DraftKings and Hollywood Casino itself offer Evolution’s live table and card games to PA players. These are the best live casino games in the world, and very few players in the United States have access to them at this time since Evolution only offers games in legal, regulated states.

PA players can also sign up on offshore live casinos like Red Dog Casino to play live dealer games like baccarat, blackjack, and roulette with real dealers from around the world.

Very few states offer such a large number of top gaming options to players. And the best part is, this all creates jobs and drives the economy in Pennsylvania. We wish Hollywood York Casino every success!