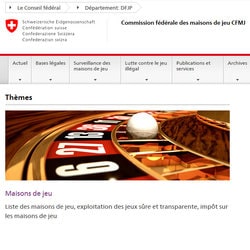 Since January 1st, 2019, Switzerland   legalized its online gaming market. The first legal online casinos in Switzerland are being set up, such as Mycasino.ch, Jackpots.ch, Swisscasinos.ch and Casino777.ch. Thus, only legal online casinos in Switzerland received their license by the Federal Commission of Swiss Gambling Houses (Commission Fédérale des Maisons de Jeu or CFMJ) and are entitled to legally offer their games to Swiss players.

As for the others, they can no longer make available their slot machines and other tables with or without live dealers to the Swiss players. CFMJ has just published a first blacklist of online casinos blocked by Internet service providers. However, other names should be added to this list in the coming weeks and months.

The Swiss Federal Commission of Gambling Houses   published a list of 39 unauthorized online game sites in Switzerland. Telecommunication service providers are blocking access to this so-called illegal service. Indeed, once online game operators don’t get CFMJ’s license, they are considered illegal. In this list of 39 names, we may find very popular sites, in particularly from the English market such as 5dimes, Bet-at-Home, Bet365, Intertops or VideoSlots, to name a few.

For these online game giants, the Swiss market is considered a small market. The withdrawal of this market does not really have an impact on large groups such as Bet-at-Home or Bet365 which reach every year amazing amounts.

The Lotteries and Betting Commission launched its own blacklist including 65 names. Also in this case, operators are not allowed to provide their casino game services, sports betting or poker tournaments to Swiss players. In addition, ISPs blocked their addresses even though VPNs (virtual private network) easily give access to these sites. In the 65 names’ list, we may also find major international operators such as Unibet, 1xBet, Betclic, MyBet, Bet-at-Home or Bet365.

Betworld site is declined in 20 domain names such as Betworld 1 to Betworld 19! As for Interwetten, it is found 7 times on the list of banned sites. Other sites such as Xbet and Solobet are also in the line of sight of Comlot.