Online gaming legislation in the United States : a complete about turn 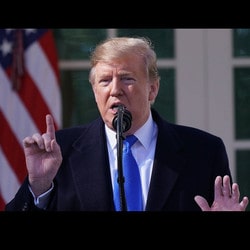 Even though all the signs seemed to indicate progressive changes in the legal area around upcoming  legislation on online cash games in the United States, the Trump administration has just published a decree that is completely opposed to this and could mark the beginning of a new prohibition era in the whole country. Many can see the invisible hand of traditional casino owners behind this volte-face, in particular that of Sheldon Adelson, one of Donald Trump’s most visible supporters.

There has been a love affair between the United States and the online gaming industry that has gone on for twenty years with many ups and downs. Some would say it’s like a novel whose latest episode is quite sad ; for American fans of online cash games anyway. In mid- January, the American Department of Justice decided to place quite an obstacle in front of those who wanted global legislation of the industry in the whole country. Based on a law to fight organised crime going back to the sixties, the Trump administration opposes with the Department of Justice decree, any form of online betting. If this new ruling were to be strictly observed, it could completely negate the progress made in certain states over the past few years. Online casino, poker, lottery and sports betting platforms that have been created in these could be forced to close.

Since the interpretation of the law against organised crime, that took place under the Obama administration in 2011, it seemed that there would be an easing in the legal rulings against online cash games. Certain states became particularly involved, authorising them in their own jurisdictions. This happened in Nevada, New Jersey, Pennsylvania and Delaware. In these different states, different forms of online games including virtual casinos have appeared over the past few years. If the new decree was observed to the letter, it could lead to the pure and simple closure of these platforms based on the Wire Act. This is a law on communication dating from 1961 that forbids the use of telecommunications for commercial reasons for cash games. According to the assistant Minister for Justice, all of these new platforms would have 90 days to conform to the law; with the undercurrent that they need to cease operations.

Strong lobbying by Sheldon Adelson and his peers

For a lot of observers, this step backwards may have originated from strong lobbying by American land based casino owners. If some of them gave in to the lure of online gaming, the majority of the leaders of the American casino games industry remains strongly opposed to them. Included in this group is Sheldon Adelson, Director General of the Las Vegas Sands, the number 1 in the sector worldwide.

A major supporter of the “Coalition to stop internet betting” and also of Donald Trump, this billionaire could have had an influence on the new direction of the Department of Justice. After financing the current American president’s campaign, he also gave a large donation to the Donald Trump foundation in April 2017. At the time, many saw this gesture as a means for the casino magnat to bring pressure for the textes dealing with online casinos to be reinterpreted and now one can say that they weren’t wrong.