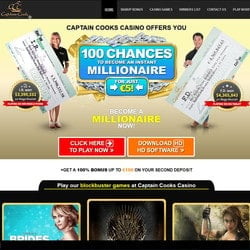 Things have greatly changed since then with the arrival of main names in entertainment like Netent, Betsoft, Playn Go and many more. Microgaming’s progressive jackpots are very popular with online players and in particular one: the Mega Moolah slot machine. Its pool increases continuously every few seconds. On the 5th and 6th of March 2019, 2 players won the jackpot within 24 hours.

Live Dealers Casino brings you everything on the 2 Mega Moolah jackpots won in Luxury Casino and Captain Cooks Casino.

On Tuesday the 5th of March 2019, a Luxury Casino player won $12, 945, 688 ( €11.4 million) on the Mega Moolah progressive jackpot. Then 24 hours later, it was the turn of another player to win 3,308, 063 Canadian dollars ( 2.1 million euros) at the same slot machine and this time it was in the online casino, Captain Cooks Casino. Both of these virtual casinos belong to the same Casino Rewards group. Mega Moolah’s strength lies in the amount that players win. In the space of 24 hours, this progressive jackpot made 2 new euro millionaires. This can be explained by the number of online casinos equipped with Microgaming games. Also, the pool of these progressive jackpots increases with the number of players and the level of the bets. So, in the space of 24 hours, two players have enough to fulfil most of their dreams.

It must be said that once a progressive jackpot is won, the pool doesn’t start again from zero. This explains how within 24 hours the pool reached 3,308, 063 Canadian dollars, which were won by a player.

Casino Rewards group has no less than 29 online casinos. It’s the largest online casino group that is very popular in the Canadian market. The online casinos, Luxury Casino and Captain Cooks Casino have been in the limelight since on the 5th and 6th of March two of their players won the Mega Moolah progressive jackpot. In October 2018, a Grand Mondial Casino player won more than 18 million euros on Mega Moolah. This online casino also belongs to the Casino Rewards group. In the space of a few months, several players on this progressive jackpot have become millionaires. Quatro Casino and Grand Mondial Casino are very well known casinos in the world of igaming. Very many Canadian players play in the casinos belonging to this group.

The list of this empire’s casinos’ winners is amazing. You only have to look at the site’s home page to see that the list of winners gets longer every hour. Along with the various winnings depending on the games, one can see the names of the online casinos, the winners’ initials, the game titles ( mainly slot machines- Editor’s note) and also the amount won and the date. Microgaming’s Mega Moolah progressive jackpot has a bright future and it’s well on the way to beating records for players’ winnings in 2019.