Stanley Ho gives his daughter a luxurious house for her engagement 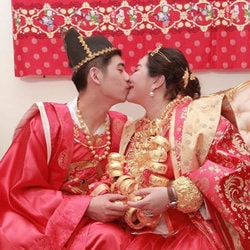 Powerful, wealthy men rarely do things like everyone else. Stanley Ho, the casino magnate has just proven this once again on the engagement of his daughter, Sabrina. Celebrated at a level that is to be expected given the social standing of the young couple in question, the event stood out particularly due to the announcement of an unusual gift for the future couple.

A young couple from wealthy backgrounds

The eldest daughter of the billionaire Stanley Ho and his fourth wife Angela Leong, the current vice president and executive director of SJM Holding, Sabrina Ho is well known in society in Macau and Hong Kong . Very involved in the world of culture, she is the director general of Poly Auction Macau Limited and Chiu Yeng Culture. The 28 year old is one of the Hong Kong magnate’s 17 heirs.

She is already spoken for by a young Harvard student from the north- east of China. Thomas Xin Qilong, 21 years old, won the beautiful heiress’ heart after they met in 2018. After just a few months, the young man, also from a wealthy background, convinced her to become engaged. When posted on social media a few months ago, the official engagement announcement affected many. The wedding is to be celebrated in a few weeks time in a castle in Portugal.

Gifts worth more than 75 million dollars

In contrast to many young couples, Sabrina Ho and her fiance are financially secure and really don’t have to worry. At the celebration of their engagement, both young people received a mountain of gifts from their prestigious guests. Diamond and gold jewellery given by to the couple from various well wishers is valued at 100 million Hong Kong dollars which is about 12.7 million US dollars.

Although all of that pales into insignificance compared to the the exceptional gift from the father of the bride to be. Stanley Ho gave the young couple the keys to a house worth 500 million Hong Kong dollars or 64 million US dollars. An incredible amount for a gift but one that is in keeping with the power of the Hong Kong casino magnate.

This marriage has attracted our attention mostly because it involves one of the daughters of one of the richest men in Asia. Although Stanley Ho has retired from business, the shadow of the man known as “The Godfather” or “The King of Macau” still hovers over Macau. This is very understandable given his great impact on the history of the small autonomous region that has recently reverted to China.

Thanks to an almost 40 year long monopoly over the sector, the Hong Kong business man succeeded in building an immense empire which survived even after it opened up to competition. Now, his empire comprises of 19 Macau casinos along with several other businesses mainly in tourism, hotels and other related sectors.

Stanley Ho officially retired in June 2018 at more than 96 years of age, leaving his empire in the hands of his wives and his many heirs.