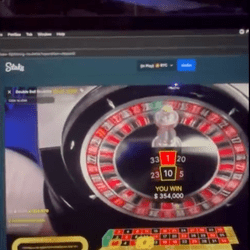 Ask anyone under 35 who the coolest rapper alive is, and there’s a good chance they’ll say Drake. The rapper has over 40 million Twitter followers and has billions of views on his music videos.

Despite being a superstar with hundreds of millions of dollars at his disposal, Drake enjoys regular pastimes like the rest of us. This month, a viral video of the rap superstar showed that he likes playing online roulette games.

Being a huge social media presence, Drake regularly updates his fans with videos of his adventures. This month, he sent out a video to Instagram which showed him playing online roulette from his home in Toronto.

While bets of $100 or more might excite average players, the video appears to show Drake wagering $200k on a single spin! In it, he predicts that it will land on eight, and amazingly, he wins. Given that most online roulette games pay 35:1 for straight bets, you can do the math.

As if this wasn’t enough, Drake then posted a second video showing him winning $300k. However, at this stage, some of his fans called him out in the comments claiming that the videos were paid ads or that they were fake. One pointed out that the casino he was playing at in the first video has a maximum wager of $20,000, so the $200k bet was fake.

We don’t speculate on that. Many casinos have higher table limits for VIP players. It’s perfectly possible that they knew who he was and arranged for him to access a special VIP lounge.

While it’s unlikely that you’ll be betting as much as Drake on a single spin, it’s still a lot of fun to play roulette online with real dealers. As long as you keep it fun and don’t bet more than you can afford to lose, it can be a great way to relax and unwind, and hopefully, you’ll win some money.

These days, there are lots of great live roulette games like Lightning Roulette. When you play it, you can win multipliers of up to 500x on a single lucky number. So, you won’t need to bet like Drake to win big payouts. In this case, if you wagered £10 and won the 500x lightning multipliers, you’d pocket £5,000 in one spin.

You can check out some of the top live roulette games at our approved roulette casinos. PlayFrank is a great place to start, but you should look at our full list to see where else you can play in a safe and secure environment.