Decrease in Macau Casinos Revenue in May 2018 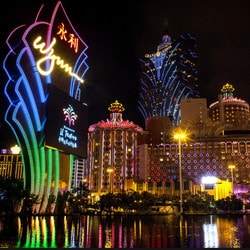 Revenue in Macau’s casinos decreased slightly in May. Casinos in Macau, the international gaming capital, are at 25.5 billion patacas (3.16 billion dollars) whereas in April they were at 25.7 billion patacas. These figures go against analysts’ forecasts of 16 to 20% growth although there’s no need for alarm in Macau’s casinos. The Chinese government is encouraging them to diversify to earn income outside of casino games.

Live Dealers Casino gives you the low down on the casino situation and diversification in Macau.

Slight drop in revenue in May 2018

Things still look good for Macau’s casinos even if revenue has gone from 25.7 to 25.5 billion patacas. However, specialists had predicted that income would increase by 16 to 20% but the reality was different to the optimistic forecasts. Macau had several dismal years with the Chinese government’s anti-corruption policy. The only enclave where the Chinese can legally gamble went through 5 difficult years. Since then, high rollers have reappeared at the gaming tables in particular at baccarat tables, the most popular game in Asia. Macau’s casino’s finances are healthy and can only encourage investors such as Sheldon Adelson to open new casino-hotels in the region.

Casino games represent an enormous financial gain for Macau’s casinos. Stays in the region’s many hotels certainly contribute to the state’s income but not as much as the billions brought in by table and card games and slot machines. The Chinese authorities are encouraging the 6 casino owners to diversify. So Sands China, Galaxy Entertainment, Melco Resorts, MGM China, SJM Holdings and Wynn Macau plan on hitting the jackpot not just with casino games but also in other sectors. A bit like in Las Vegas, Macau’s casinos want to be entertainment centres with concerts, high class shows such as Cirque du soleil, starred restaurants and various attractions to attract more families. Major singing stars appear in the vast concert halls in Macau’s hotels. For example, Celine Dion appeared on the 29th and 30th of June in the Cotai Arena and Maria Carey next October in the Parisian, Macau.