Skip to content
Home/Deal Or No Deal, Playtech/Playtech Launches New Live Deal or No Deal Game 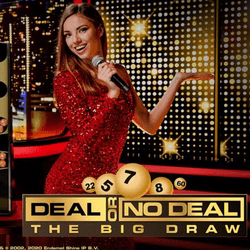 Leading live games provider Playtech has officially launched a Deal Or No Deal live game show based on the classic Endemol game show. Playtech isn’t the first company to release a live dealer game based on the game show. Evolution Gaming has had one since 2019. It has proven to be hugely popular, which is likely what prompted Playtech to launch a rival game.

Playtech’s Live Deal or No Deal – The Big Draw

This version of Deal or No Deal incorporates elements of bingo. There are 16 briefcases, and the player’s ticket has 15 numbers on it. As numbers are drawn from the ball mixer, briefcases are eliminated, and numbers and their associated prizes are struck off the player’s card.

If you’re familiar with how Deal or No Deal works, you might already have guessed that the final sixteenth briefcase will contain the player’s prize. This is revealed after 15 briefcases have been eliminated during the draw.

However, after the seventh ball is drawn, the Banker will make his first offer of a deal. As in the real game, the player can either choose to accept or reject the deal.

What happens next depends on what the player decides to do.

This live Deal or No Deal game from Playtech also has extra features. You can choose to boost one prize before the game begins, and there’s an optional side game which offers cash prizes based on the first 20 balls drawn.

A Game to Rival Evolution’s Live Deal or No Deal

Although very different in format and gameplay, this game will rival Evolution’s popular Deal or No Deal game. It more closely resembles the original format of the game show, but Playtech’s format will hold appeal to bingo and lotto players. It will also rival Evolution’s Mega Ball game, which was the first live dealer bingo/lotto game to launch earlier this year.

Before you try Playtech’s new Deal or No Deal game, we suggest playing both of the aforementioned games by Evolution Gaming. You can then try Playtech’s game, which is a sort of mix between the two.

You can try these games at 32Red or Mr. Green. Get ready to have a lot of fun with friendly live dealers.