Skip to content
Home/Casinos USA, Las Vegas Casino/Evander Kane sued by the Cosmopolitan Casino due to a gambling debt 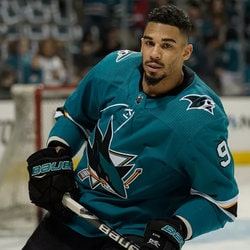 The big debt business in the casinos doesn’t protect anyone, especially the wealthy ones. We are aware of many cases of professional players or businessmen who were in debt with a casino and were not able to pay it.

However, cases with celebrities from the sporting world are less common. This one is outstanding since it concerns one of the NHL’s biggest stars, the North American Hockey League and a casino in the club town of its biggest rival.

All professional hockey fans know Evander Kane. A great revelation in the recent years, the young and vibrant left winger of the Sharks of San Jose is in the headlines.  During the pre-season finals, he was controversial due to his expulsion, after a dispute with the referee. His team was playing against the Las Vegas Golden Knights.

However this problem and the great rivalry with the Golden Knights’ star Ryan Reaves did not prevent Kane from getting into a difficult position with another major casino in Las Vegas. According to several local newspapers, the Canadian hockey player would be subject of a complaint by the management of the Cosmopolitan Casino.

The casino, which is based in the Las Vegas Strip, would have entered a lawsuit at the Clark County Court to recover U$ 500,000, from gambling debts incurred by the player.
According to the casino’s version, the debt dates back to April 2019. Kane went to the casino on April 15 and was granted a loan for a total of U$ 500,000. Presumably not lucky that night, the player would have multiplied the credits (8 in total) in the house, before leaving.

On that date, however, he didn’t pay the casino, which claims today, in addition to the amount of the initial debt, the reimbursement of all legal costs incurred.

Opened in 2010, the Cosmopolitan Casino was quickly affected by the global economic crisis of 2008. Just inaugurated, the casino’s board of management was replaced by the Deutsche Bank. In 2014, it was sold to the US investment group Blackstone for U$ 1.73 billion.

The new owner is backing it up by investing over U$ 500 million, making it one of the most attractive casino hotels in the recent years. Located on the Las Vegas Strip, near the Bellagio, the casino is on the real estate market; Blackstone wants to sell it for a minimum of U$ 4 billion. In the meantime, the US investment fund also bought the Bellagio for U$ 4.25 billion.