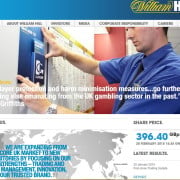 888 Holdings was founded in 1997 by two sets of Israeli brothers Avi and Aaron Shaked and Ron and Shay Ben-Yitzhak. Now their family trusts run the company. Together the two families own almost 60 per cent of 888 Holdings the Shaked family own more at just below 50 per cent and the Ben-Yitzhak family own about 10 per cent of the shares. It had been known earlier in the negotiations that Avi Shaked did not find William hill’s offer of £2.10 per share acceptable. It was reported that he wanted an offer of £3 per share.
So there was always a very strong possibility that as a major shareholder he would block the sale to William Hill. It is not known if William Hill will make another attempt to take over 888 Holdings but if it did the negotiations would only take place if and when all of 888 Holding’s shareholders were in agreement on any offer made. It has been reported that the main body of shareholders and also the board of 888 Holdings were in favour of the company coming to an agreement to sell.

There has been ongoing speculation that the London Stock Exchange listed company Bwinparty could be taken over. At the end of 2014 Bwinparty announced that it was engaged in takeover negotiations. William Hill along with the Amaya group and Playtech were said to be involved in these discussions. There hasn’t been any news of progress in these talks since last November but last week when there was still the possibility that William Hill could take over 888 Holdings, shares in BwinParty went down in value since it seemed that William Hill was unlikely to bid for BwinParty too. Now however, with 888 Holdings out of the way it may be possible that William Hill will look at Bwinparty with renewed interest.
By admin|2017-06-04T13:41:51+00:00February 21st, 2015|888Casino, William Hill Casino|0 Comments