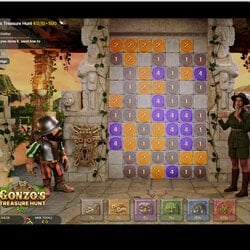 Evolution officially launched the game at its partner live casinos this month. It can be played at Mr Green live casino by UK and European players.

When Evolution acquired NetEnt last year, we suspected that a game like this might be in the pipeline. Here’s some basic information on how it works.

This exciting new live casino game show features a 3D animated Gonzo on the screen as well as a friendly and entertaining live dealer to explain how the game works and commentate on the action.

Gonzo’s Quest is undoubtedly one of the most popular slot games of all time. However, NetEnt has several other legendary slot games in its catalog, including Starburst, Twin Spin, and others.

Will we see more games like Gonzo’s Treasure Hunt in the future? Based on the popularity of this game so far, we’d imagine so. Be sure to check it out at the Mr Green live casino.