Florida Hard Rock Hotel Casino in the shape of a guitar 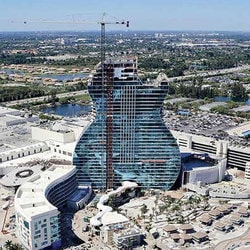 The first luxurious hotel casinos were built in the United States, in Atlantic City or Las Vegas. Macau and singapore followed and now Japan is joining in. Nothing is too much for the hotels’ clientele with luxury suites, massive gaming rooms and shows with international stars.

The world’s hotel casinos are no longer similar to playgrounds where players come to play slot machines or table and card games. They have become places to experience life and people all over the world don’t travel just to gamble in a casino but to see shows. Just last Saturday, Celine Dion gave her last show in Caesars Palace Las Vegas after a 16 year residency and more than 1000 shows! The Florida Hard Rock Hotel has also wanted to stand out from its competitors by opening a 120 metre hotel in the shape of a guitar.

A 1.5 billion dollar hotel in the shape of a guitar

In Florida, the Hard Rock hotel-casino won’t go unnoticed. At 120 metres, the guitar shaped hotel-casino should be visible to inhabitants and to tourists. The guitar is the symbol of  Hard Rock that is known worldwide. It will be made in glass and the group has spent 1.5 billlion dollars (that is 1.3 billion euros- Editor’s note). The hotel casino should open in October 2019. In July, online reservations will be open for those who wish to stay in one of the 638 bedrooms.

The Hard Rock hotel doesn’t do things by half with its 40 000 square metre artificial lagoon. But there is more: villas with valet service, a 1100 square metre bar at the top of the hotel as well as an enormous spa. The name Hard Rock is synonymous with “Rock’n Roll Attitude” and its electronic guitar logo is to become the hotel’s architecture and will have a 7000 seat concert hall! For the launch, the group Maroon 5 might appear on stage to inaugurate this atypical hotel.

Luxury hotels have huge gaming rooms with slot machines as far as the eye can see. From Las Vegas to Macau and Singapore, casinos offer thousands of slot machines and hundreds of gaming tables. This is true for the Hard Rock Hotel Florida which plans to win the jackpot with its casino games. To do this it will install no less than 3000 slot machines. The sound of the slots will cause players’ adrenaline to rise.

The Hard Rock Hotel Florida will install 228 gaming tables and of course these will include roulette, blackjack, baccarat, sic bo, craps and poker tables. The project will create about 1200 jobs with the opening of 14 restaurants, theatre management, dealers, security staff and hotel housekeeping.

We will need to wait a few more months to appreciate the work of the architects of this outstanding  project.