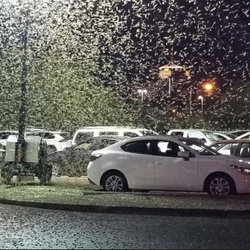 Since July 27, 2019, Las Vegas tourists and locals have witnessed an unusual spectacle: a grasshoppers’invasion that affects the entire city. The neon lights of casinos and restaurants in the city seem to attract these insects which presence in mass makes the streets almost impassable.

The phenomenon is expected to last another two weeks.

This 6.7-kilometer strip in the South of Las Vegas, home to the world’s largest casinos and the finest hotels and resorts is the most affected by this invasion. In less than an hour, several thousands of grasshoppers invaded the city and most particularly this day and night lively main road. Displacements are therefore almost impossible.

The phenomenon has even pushed the US weather service to ask drivers to limit car trips due to poor visibility. This decision is perfectly understandable when we watch thousands of videos posted on social networks.

For now, staying outdoors in some places at night is almost impossible since insects are very attracted by ultra-violet lights of neon signs. This, among other things, justifies the fact that the phenomenon is brighter in the city of games than in the rest of Nevada.

Nothing to do with God’s wrath

While some religious fanatics evoke “ God’s wrath” that hits the city in reference to the 10 plagues that fell on Egypt in the Bible, scientists reassure that this quite rare phenomenon is quite natural. In fact, it might be caused by an unusual reproduction of insects due to this year’s abnormal wet weather in winter and wet spring. In six months, the region had a much higher rainfall than all over the year.

Furthermore, the presence of those insects in the city is not unusual since this species is present in the region. Several invasions of this type have been recorded since 1960.

No fear a priori

Even though this unusual phenomenon bothers Las Vegas casinos business, it is not a risk to health. Grasshoppers do not bite. They could sting if and only if they were clumped or felt threatened. But again, apart from a slight irritation of the skin, there is nothing to fear.

According to local media, they are not among species considered a problem because they do not host diseases. In case of sting, the use of an antiseptic is enough to relieve the skin. For sure, life will return to normal in the city as soon as these insects continue their northward migration. Locals and tourists who are passionate about the big casinos and their atmosphere of madness will just have to be a little patient.