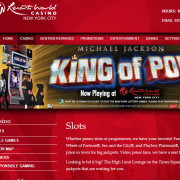 A grandmother who left her five year old granddaughter in her car while she visited a casino in New York was arrested. The woman, 56 year old Renee Osby is facing charges after police were called to the casino. She left her granddaughter in an unheated car for over an hour while she played the slot machines in the Resorts World Casino. When she was arrested she was charged with acting in a manner “injurious to a child”.

Two visits to the casino

When Renee Osby was questioned after she finally returned to her car she claimed that she had just gone into the casino to cash a cheque. However security guards had seen her earlier when she tried to bring her granddaughter into the casino with her but was told that children weren’t allowed into the casino. She returned to the casino some time later and the security guards who had seen her were suspicious that she no longer had a child with her. The security guards searched the casino’s car park and found her five year old granddaughter inside her unheated car in temperatures that were below freezing. They called the police. The child had spent over an hour in the freezing car while her grandmother played the slot machines.

The management of Resorts World Casino released a statement referring to the matter: “Resorts World security observed a five-year-old child in an unattended vehicle in the parking lot. They were able to safely remove the child from the vehicle and immediately called 911.” The incident took place in the Resorts World Casino in Jamaica, New York.

Resorts World Casino New York is a Genting casino. It offers over 5000 electronic table games, these include roulette, craps, baccarat and Sic Bo. The casino offers players over 3000 slot machines including progressive slots with major jackpots. Genting is a Malaysian company with its headquarters in Kuala Lumpur. The company is involved in many activities, the main one being casino development and management. Genting runs or is in the process of developing casinos in many countries including Malaysia, Singapore, the Philippines, South Korea, the United Kingdom and the United States. Resorts World Casino New York opened in 2011.