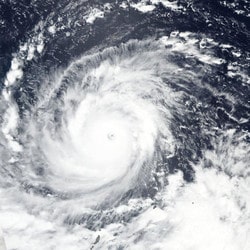 The specialists in Macau’s metreological service are quite pessimistic for the coming months. They believe that Macau could be hit by several typhoons and in particular by a”Super Typhoon” that could cause great damage. Every year this part of the world faces more or less serious typhoons. In September 2018, the tropical typhoon Mangkhut hit Asia and Macau in particular.

It had reached the south coast of China and was particularly devastating. Sixty nine people were killed, 65 in the Philippines and 4 in China. More than 5 million people were in the path of the Mangkhut cyclone. Strong winds and floods caused several hundred million dollars damage.

The metreological forecast for 2019 is pessimistic for the south China region. Macau’s casinos might be forced to close as they did for the Mangkhut storm.

Cyclones in Macau in 2019? Very likely according to the experts

According to the experts, the weather forecast for Macau is not at all good. They estimate that the first violent storm could happen at the latest in mid-June. Four to six typhoons could hit within an area of 800 kilometres of the international gaming capital. The typhoon season ends at the beginning of October which means that the region will be on alert for 7 months. The category of the  typhoon is not yet known (Category 10 is the strongest – Editor’s note). With a category 8 typhoon public transport is stopped. On the other hand Macau’s casinos such as the Venetian Macau, Wynn Palace, Lisboa Casino, MGM Casino and many others can remain open.

The cyclone Mangkhut winds reached 160 kilometres an hour when it hit Macau in September 2018. It caused major floods in the whole region. Some waves reached 2 metres which gives an idea of the strength of the phenomenon!

The bad weather may cause Macau’s casinos to close. No risks are taken with clients’ lives. So during the Mangkhut typhoon, Macau’s casinos remained closed on Saturday the 15th of September 2018. Each decision is taken on a case by case basis depending on the strength of the winds. This has a direct impact on the revenues in Macau’s casinos, which could face a loss of earnings of several million dollars. In 2018, the loss due to typhoon Manghut was estimated to be 105 million dollars for Macau’s casinos.