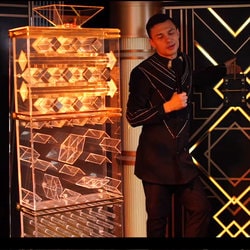 Every year Evolution Gaming innovates by launching new live games. After roulette, baccarat and blackjack tables, the leading live dealer games developer has just launched a new range of games: televised games. We have mentioned this subject several times, in particular when Dream Catcher, Lightning Roulette and Live Monopoly were launched. These studio based games are hosted by dealers who also play the role of facilitators.

Live Dealers Casino brings you more on these live games that are pure entertainment. Certain games are based on either television programmes like Deal or No Deal or board games like Monopoly from the Hasbro group.

In contrast to other developers, Evolution Gaming has had the intelligence to to diversify its range of games. With other developers such as Authentic Gaming, Ezugi, visionary iGaming and LuckyStreak just to name a few, only table and card games like roulette, blackjack and baccarat are available.

Evolution Gaming surprised its competitors by diversifying. It has formed partnerships with major groups in order to use their games and adapt them as live versions. The result is amazing. One only has to look at Monopoly Live to see the Evolution Gaming studio’s exceptional 3D graphics work. A 3D Mr. Monopoly moving on the gaming mat is breathtaking.

Evolution Gaming worked with the Endemol Shine group to use the rights to the well known game Deal or No Deal. This was a good deal for the developer, who knew how to adapt a TV game show as a live version that internet players, especially those who aren’t fans of casino games, can play.

Televised games available to all players

Evolution Gaming’s strategy is to enable players who aren’t particularly adept at casino games to play board games. A good strategy for those who like entertainment that doesn’t require particular knowledge to play. For example, baccarat and blackjack require specific knowledge of the rules and strategies to maximise chances of winning.

In contrast, televised games don’t need one to master rules or to calculate probabilities. Everyone can play them. With this type of game, every one can play in the presence of a host filmed live in one of Evolution Gaming’s several studios.

This strategy, put in place by the leader in live dealer games, works perfectly. Games such as Deal or No Deal, Monopoly Live and Lightning Roulette are among the group’s best games. Even Football Studio is a great success with online players. Innovation is Evolution Gaming’s mainstay. The developer should pull more great finds out of its magician’s hat in 2019. To be continued…