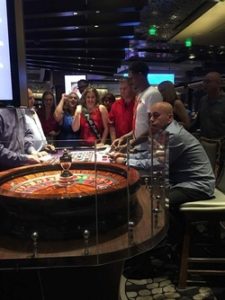 This is an unusual story of the type loved by Americans. Leslie Sategna lives in California and was born on the 16th of September 1980. She is in the habit of playing roulette on her birthday and placing her chips on number 16. She goes to the gaming capital not every year but just once every ten years. She gambles in Sin City with friends and only bets on number 16 at exactly mid-night. This roulette player has such good luck that she has won three times since the age of 16.

Her father bet $10 for her 16th birthday

For her 16th birthday, Leslie Sategna asked her father who was going to Las Vegas to bet $10 on number 16 at roulette. The number 16 is her date of birth and also her age. Her father went to a casino and bet the $10 just as his daughter asked him to do. The ball stopped on number 16 and she won $350. To celebrate her 26th birthday and of an age to gamble this time, she went to Las Vegas with a friend and bet $10 on a roulette table in another casino. Mid-night rang out, she put her chips down, the ball was thrown and stopped a few seconds later on number 16. The lucky player walked away with winnings of $350 at a roulette table on the same day and at the same time. A win at roulette on a full number means one gets 35 times the bet.

Having won $350 on her 16th and 26th birthdays, Leslie Sategna went to the Aria Casino in Las Vegas. This time she placed $1000 on number 16 her favourite number. At exactly mid-night she placed her chips on the green mat, the ball was thrown and stopped on number 16. The lucky player walked away with winnings of $35000. It’s as if the roulette wheel has an appointment with her every ten years to make her happy. Three times, at ten year intervals, she played roulette in a Las Vegas casino and bet on number 16 at mid-night. As the saying goes “Good things come in threes”.

As you will have guessed, Leslie Santegna has decided to go to one of the many casinos in Sin City on the 16th of September 2026. She will be with her family and friends and at mid-night she’ll place not $1000 but $10000 on number 16. If the roulette ball lands on number 16 she could win $350 000 with this bet. It’s unlikely that this player who has made headlines in America will be alone at the roulette table when she’s betting on number 6 on the 16th of September 2026. So we’ll see you on the 17th of October 2026 to tell you if Leslie Satenga won $350 000 or has just lost part of the winnings she has built up over her three prior visits. To be continued.