Las Vegas Shooting: US$ 800 Million to reimburse the victims 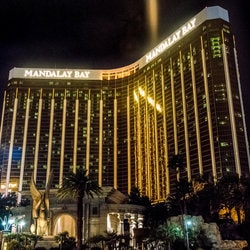 Over two years ago, Las Vegas was the site of one of the most impressive mass murders in its history. From one of the rooms at the Mandalay Bay Resort and Casino, a gunman opened fire on a crowd of festival-goers, killing 58 people and injuring several hundred others.

Today, after several procedures and negotiations the MGM Resorts International group, owner of the casino, is reaching a financial arrangement with the victims and their families.

On October 1st 2017, about 22,000 people gathered in the outdoor courtyard of the Mandalay Bay Resort and Casino in Las Vegas. The Casino Complex was hosting Route 91 Harvest Festival, a country music festival in the open air. But at 10 pm (local time), the event turned to drama. From the window of one of the rooms on the 32nd floor, a gunman fired several times at festival-goers. The shooting lasted several minutes before the police intervened. Before killing himself, Stephen Paddock murdered 58 people and made more than 500 wounded, including more than 400 by bullets.

In the aftermath of this tragic event, survivors of the shooting and several families of victims indicted the casino, accusing it of being careless in its security. Over 1000 criminal proceedings were held in several States.
Before these legal lawsuits the MGM Resorts International group argued with the Safety Act, claiming to have entrusted the security of the venue to a certified company. The casino group also initiated lawsuits against the victims’ families   who indicted it in court. In order to avoid the scandal the casino responded.

An agreement and a huge sum

The victims and their families, gathered in associations, kept up criminal proceedings to summon the casino in court. In total, over 2,500 lawsuits were identified. In order to avoid a lengthy trial that would further tarnish its image, however without taking responsibility on the shooting, the American casino group reached a financial arrangement with the plaintiffs represented by a group of lawyers.

Under this agreement, survivors and the victims’ families will receive a total sum of US$ 800 million. In return, all legal proceedings against the MGM Resorts International group will be discontinued. This amount includes a contribution of US$ 735 million paid directly by the insurers of the American casino group.

For the nearly 2,500 plaintiffs, it will be expected that the case will be finalized until the end of next year. The compensation’s payment to the people involved will allow the wounded peopled to pay the medical expenses resulting from this shooting.