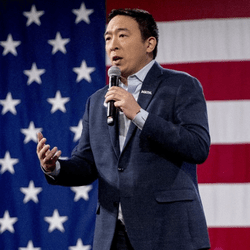 Andrew Yang was a relatively unknown name until he entered the race for President last year. While he was ultimately unsuccessful in his run, he has continued to grow in prominence, and now the entrepreneur-turned-politician is running for Governor of New York.

Yang is already known as a liberal, forward-thinking politician who proposes radical ideas like Universal Basic Income. One of his proposals in his quest to clinch the governorship in New York is to build a brand new casino on Governors Island.

Why Is Yang Pushing For a New Casino?

Andrew Yang believes that a new casino in the 172-acre Governors Island, which is in New York Harbour, would bring substantial revenues into NYC. This comes at a time when the city is spending vast amounts of money due to the recent public health crisis. Yang proposed the idea in a recent interview with The Breakfast Club. He hasn’t previously spoken of it and didn’t elaborate on any further details, other than to say the cash it would generate would be “bananas.”

There are currently 32 casinos in New York. However, these are currently situated on Indian Reservations, and there are no land-based casinos in NYC. It’s not difficult to imagine that a percentage of the city’s 8.5 million people, not to mention the substantial number of tourists it receives, would enjoy a chance to gamble in the city itself. The scenic view from Governors Island would also surely pull in tourist dollars.

In America, any venture is possible, but there are no guarantees that this proposal will go ahead. Governor’s Island is a quiet national park with few shops and only a handful of residents. It’s not clear that they’d warm to the idea of a busy gambling property being built on the island.

New Yorkers also have the option of hopping across state lines to Atlantic City, New Jersey, where they can play at plenty of world-class casinos on the Boardwalk. They can also play live casino games online at US-friendly casinos like Red Dog.

Whether or not Yang’s vision comes to fruition, there is momentum behind the idea that new casinos should be built in New York. As one of the most liberal cities in the nation, it’s somewhat baffling that a gambling prohibition that was passed in the 1840s still stands.