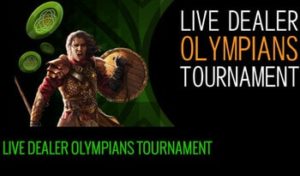 With its Live Olympic Tournament, Celtic Casino reinforces its position as a leading creator of online roulette, blackjack and baccarat tournaments with its partner Fairway Casino. Celtic Casino has pulled out all the stops to hold onto  its table and card games fans by offering them about $6,100 in prizes every month. Celtic Casino is launching a series of four new tournaments called “Live Dealer Olympians Tournament” running from June to September and which will replace the “Game of Thrones Tournament” that ran for eight months. For the month of June 2016, all the baccarat, blackjack and live roulette tables are involved and points can be collected at them to try to win one of the 25 prizes offered by Celtic Casino.

The live games tournament on Celtic Casino from the 1st to the 30th of June involves all the live tables in the casino. Every bet placed at the traditional games tables (baccarat, roulette and blackjack) will build up points that could lead to a real money prize from this live gaming leader. The lucky winner will receive $2 500, second place gets $1000, 3rd to 10th place will win $200, $100 for 11th to 15th places and finally $50 for 16th to 25th places. The number of winners has been increased because previously only the first 15 players were rewarded while the new formula has 10 more. So more happy players are eligible to win prizes!

Every month Celtic Casino is putting its hand in its pocket to spoil its players because every month $6100 will be given to the first 25 players. The four proposed tournaments are worth $24400 in prizes not including the prizes in the previous tournaments. It’s quite a large budget for this live casino to hold these tournaments that are very popular with players and every month more and more players are signing up and taking part. Celtic Casino and Fairway Casino are the only online casinos with live dealers to offer almost constant tournaments on Visionary Igaming tables. No other casino in the online gaming industry offers as many tournaments as Celtic Casino which has an excellent reputation for its tournaments and also its range of live games and slot machines running on Betsoft software.

Other live blackjack tournaments (July 2016) online roulette (August 2016) and all tables (September 2016) are planned and you can follow these on the Celtic Casino’s leader board updated every day. If you don’t have an account on Celtic Casino now is the time to open one and participate in these tournaments.