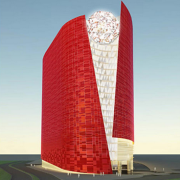 Macau has surpassed Las Vegas in terms of revenue and also in its ability to keep attracting clients to its many casino resorts. Now claims are being made by the developer behind a new casino hotel being built on the Cotai Strip that will offer its very wealthy clientele “unsurpassed levels of luxury”. For years Macau’s casinos have attracted moneyed tourists from mainland China and VIP players who spend fortunes in the territory’s casinos. However, due to a crackdown on corruption in China there have fewer High Rollers visiting Macau recently but this has not dampened the enthusiasm of Stephen Hung, a former investment banker from Hong Kong. His company Louis XIII Holdings is developing the Louis XIII Hotel and Casino which is to open on Macau’s coati Strip in the spring of 2016.

The most expensive hotel suite in the world

Stephen Hung’s Louis XIII hotel casino is to offer its rich guests an experience that they cannot find anywhere else but in his “unprecedented, luxurious hotel and entertainment destination.” This will include the world’s most expensive suite where a one night stay will cost 130 000 dollars. Everything the hotel and casino offers its clients will be tailor made to their specifications during their stay. The hotel and casino is to cover over 6000 square metres and is to be decorated in the style of the French Renaissance with a baroque feel that will also incorporate the most modern design. Stephen Hung has appointed a descendant of the French King Louis XIII after whom the casino hotel complex is named to be his special advisor for the project. Princess Tania de Bourbon Parme is an interior designer. The complex will also have a luxury retail section where the lowest priced items will cost a million dollars.

The Louis XIII Casino will echo the opulence of the complex’s 230 room hotel. It will attract high rollers and other wealthy players. Stephen Hung is said to plan on setting the minimum bet at tables in the casino at 644 dollars. The casino is to have 66 gaming tables and 16 of these will be VIP tables. It is not yet known which existing licence holder in Macau will provide the Louis XIII Casino’s gaming licence. One of the existing six casinos is said to have come to an agreement with the Louis XIII Casino so that it can operate. It may be Melco Crown Entertainment but Stephen Hung has not so far named the licence holder involved. Melco Crown has links to Paul Y Engineering which used to be the name of Louis XIII Holdings.