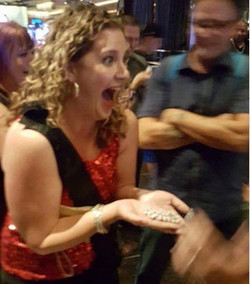 Is roulette a game of chance or not? Some people say that it’s pure chance and that to win on a full number and get 35 times your bet you need Lady Luck to be with you. Others claim that it’s a calculation of probabilities and that there are several strategies to win at roulette based on how the ball is thrown and the wheel is spun. We’ll let you decide yourself. What we do know is that Leslie Sategna is a lucky roulette player. She has won at roulette three times in Las Vegas at three different casinos (including the Aria Casino in Las Vegas) and each time it was on the 16th of September ten years apart on her 16th, 26th and 36th birthdays. She bet on her favourite number 16 three times and always at midnight.

Pokerenlignenews.com wanted to find out more about this player. We contacted her and she kindly agreed to our interview which you can read below. But first we’ll tell you her story which is like a Hollywood film. When she was 16 she asked her father to bet $10 on number 16 on the roulette wheel.

On the 16th of September 1980, Leslie Sategna was born and so in 1996 she turned 16 years old. Her father had to go to Las Vegas on business and the young girl asked him to bet $10 on number 16 at roulette. Number 16 was both her age and her birth date. Her father went to a casino but she can’t remember which one and bet $10 on number 16 just as his daughter had asked. The number came up and he won $350, 35 times the bet. Ten years later, she went to Sin City with a friend, Christina, and while walking the strip waited until midnight and then bet $10 herself on the same number 16. It worked and she won $350 on the same number so it seemed as if number 16 was programmed every 16th of September to turn up at exactly mid-night in Las Vegas. She decided on her 26th birthday that she would go back in ten years on her 36th birthday and bet $1000 at roulette.

Having won at 16 and 26 there wasn’t any reason to believe that she wouldn’t win at 36. So on the 16th of September 2016, Leslie Sategna went to the Aria Casino with 20 friends and family to celebrate her birthday with her friends. She placed chips worth $1000 on the green mat. The ball rolled on the wheel and stopped on number 16. Jackpot! The roulette player won $35 000. Cries of joy from her and her friends filled the casino and there could be no better way to celebrate her 36th birthday.

We couldn’t let such an unusual story go so we contacted Leslie Sategna for an interview which she kindly agreed to do and we’d like to thank her here.

Question: Leslie Sategna, firstly thank you for agreeing to answer our questions. Let’s go back 20 years, tell us how, thanks to your father, you won for the first time aged 16.

Leslie Sategna: I always loved the number 16 since it was the day I was born and always had it as my sports number. Your “golden birthday” is when you turn your age on the day you were born. So when I realized that my dad would be in Vegas on Sept 16th when I was turning 16 I just decided to give him $10 and told him it had to be at midnight! He came home the afternoon of my birthday and had an envelope with my $350 winnings in cash and I just couldn’t believe it! I had just got my license so the money went towards my car.

Question: Ten years later at 26, you went to a casino in Las Vegas with a friend. You bet $10 at a roulette table and once more you won. How did you react to that?

Leslie Sategna: I went to Las Vegas with a friend to celebrate my 26th and waited until midnight on Sept 16th. I honestly don’t remember what casino we were at as we had been walking all over the strip in and out of casinos and bars. But once it turned midnight, I walked up to the first roulette table I saw, placed my $10 bet and won! I spent the $350 on our trip together as I didn’t really see it as my own money to begin with.

Question: At 36 you bet $1000 at roulette and won $35000 on the same number. Did you get the feeling that you’d win and so placed the larger bet? Tell us what happened that evening. What did you plan to do with this large win?

Leslie Sategna: I decided on my 26th that I would go back and the story just kept on growing so next thing I knew I had 20 family and friends coming to cheer me on. I picked the Aria Casino as just a nice place for us all to 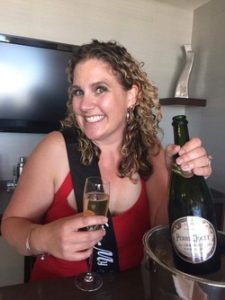 stay and enjoy the weekend. I placed the bigger bet as I had to increase the amount and felt I was doing well at work and why not have fun? There was only one time that I had a feeling it may actually happen. I didn’t realize my 36th birthday was going to be in the year 2016 until about 3 years ago and I had this moment of, “Oh my God, I might actually win this thing.” But then I quickly came back to reality and decided this was just going to be a fun ending to the story. I haven’t done anything big for my birthday in a long time as I got married right after my 30Th and was pregnant twice. So I decided that my 36th in Vegas was going be a great reason to get my friends together and just let loose while the kids were at home with my mom and mother in law. I rented a big Penthouse Suite at the Aria for all my friends to meet in. I honestly planned on losing, but told myself if I won, that I would treat my friends to a VIP club service that night, a cocktail party the second night and then a pool party at the Hardrock Café the 3rd day.

I couldn’t believe 20 people would come out just for me! So, we all went down at 11pm to scout out a table and there was only one $1000 limit table so that made it an easy choice. We waited until about 11:59pm and then gathered around the table. I asked for one $1000 chip, placed it on #16, and stood back to watch and the wheel spin round and round. Then, I couldn’t believe it as it actually hit! I have never had so much adrenaline go through my body and I couldn’t physically fall asleep for almost two days. I made true on my promise to myself and treated my friends to a grand old time. I also built a patio cover and sun room on my house for my family to enjoy being outside. Last, I was able to put $5,000 in each of my children’s college funds. So I figured I got a ton of fun with my friends, added value to my house, and planned for my kid’s future!

Question: Every 10 years you won by betting on the same number at a roulette table in a Las Vegas land based casino. Do you play in casinos from time to time or do you only go every 10 years for your birthday? Apart from roulette, what other casino games do you play?

Leslie Sategna: That is the irony, I do not gamble at all and this story just keeps building on itself! It all just started with an innocent bet at 16 and I can’t believe it is still going.

Question: You have said that to celebrate your 46th birthday that you’re going to bet $10 000. This strategy has worked 3 times, so there’s nothing to say that it won’t work once more. We think you won’t be alone at the roulette table and that other players will bet at the same time as you so they might win too. What do you think of that?

Leslie Sategna: I thought about what my next bet should be and actually if I play the pattern I went $10, $10, $1000 so it should actually be $1000 again. But I guess if I am doing REALLY well professionally I would consider it. I plan on going somewhere else (don’t know where yet) as it has been at a different spot each time. I don’t want the Casino to know as I don’t want anyone to mess with the wheel or anything like that! I am fine with others betting on my number at the same time, I just can’t make the bet for them.

Question: Your story is very unusual and worthy of a film. Have any directors contacted you about making a film?

Leslie Sategna: No, just the news and it went on to Good Morning America and ABC World News with David Muir.

Question: We hope that the roulette ball will stop on number 16 on the 16th of September 2026. If you win again will you promise to give us another interview?

Leslie, thank you very much for answering our questions.