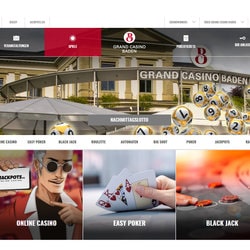 Just launched, the Swiss online casino market is already very attractive, with many surprises. The first four platforms are known by the general public and information on games is advertised. And it is public knowledge that Evolution Gaming, a leading operator of live dealers  games, will be present.

Riga will power live sections of at least two of these new casinos; the most recent one which signed with the publisher of Riga is the one owned by Baden’s Grand Casino.

That is exactly what is promised by online casino www.jackpots.ch to all its players. The Swiss online casino powered   by Baden’s Grand Casino offers a large range of entertainment, based on its Random Number Generator (RNG) game library and on its live version, powered by Evolution Gaming. Besides Gamanza’s RNG games, a software specialized in slot machines, players registered on this platform will be able to access Riga’s live dealers games, which are considered the most innovative in live gaming segment.

Under the new partnership between the two corporations, Evolution Gaming will provide, in the coming days, all games present in its live game library to power the casino’s site live section.
Still under construction at the moment, the site will make available a large variety of roulette, blackjack, baccarat and poker table games, operated by real dealers and broadcasted on live streaming from the studios.

In addition to these table games, the Swiss players registered on jackpots.ch will also be able to go through the unique experience offered by Evolution Gaming’s Show Games, such as Lightning Roulette, Lightning Dice, Monopoly Live, Dream Catcher, Deal or No Deal or Side Bet City. Note that all Riga’s creations are accessible on desktop, MAC and mobile devices such as tablets and smartphones.

To become the best legal online casino in Switzerland

This is clearly the main goal of Jackpots.ch with this partnership. In an emerging sector, the online Baden’s Grand Casino may become the reference in the matter before its three current competitors and those to come. For this end, the platform can count on the know-how and the excellent expertise of Evolution Gaming which feeds most of the best European online casinos.
But it will surely also benefit from the long experience of its parent company, Grand Casino Baden.

The so-called “Mecca of Poker” in Switzerland has built a solid reputation thanks to a well-established commercial policy, including many poker tournaments and various events organized throughout the year.

And 2 for Evolution Gaming

On the road to conquering the Swiss online gambler market, Jackpots.ch will have to face another big competitor: Casino777.ch. Owned by Davos Grand Casino, in a partnership with the Belgian group Ardent, the Swiss version of Casino777.be has also taken the services of Evolution Gaming for its live section games.