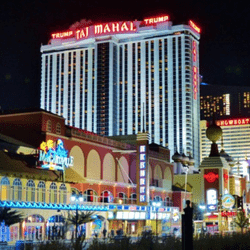 It’s no secret that it’s been a tough year for land casino operators, and Atlantic City is no exception. The latest figures from the New Jersey Division of Gaming Enforcement (DGE) show that revenue for Q2 of 2020 came in 85% below revenue for the same period in 2019.

That’s a serious drop in revenue, and we’re sure you can guess why. Yes, it’s because they were shut down in Mid-March and weren’t allowed to open again until July. Whenever they did reopen, they were given a strict 25% capacity restriction, leaving them heavily reliant on online gambling revenues.

The only Atlantic City casino to finish the quarter in profit was the Golden Nugget. It reported $25.7 million in revenues and a $3.1 million profit.

Other casinos didn’t do so well:

Overall, Atlantic City’s casinos reported a combined loss of $112 million. This is in stark contrast to the $159.2 million profit reported for the same quarter last year. When figures are adjusted for H1 2020, revenues dropped 52% year-on-year, and losses added up to $82.4 million. The first half of 2019 generated close to $245 million in profits.

Clearly, the pandemic and the associated lockdowns have had a severe impact on all casinos across the United States, but Atlantic City has been hit particularly hard. The US market suffered a 78.8% decline overall, meaning Atlantic City’s local market fared worse with its 85% drop.

Is It Safe to Return to Land Casinos?

This is going to be the big question on the minds of lots of American gamblers as we approach the final quarter of the year. There are widespread fears of a “second wave” of COVID-19, and safety measures such as social distancing, perspex screens to protect dealers and casino staff, the sanitizing communal items such as slot machines and dice are an all-too-present reminder of the danger linked to playing in land casinos right now.

Luckily, players in the Garden State can enjoy live casino gaming at The Golden Nugget, so there’s no need to take the risk. This iconic casino has a partnership with Evolution Gaming, enabling it to offer live roulette, blackjack, baccarat, and game shows with real dealers.

UK players who happen to be reading can’t play at The Golden Nugget, but they can play the same games at 32Red online casino.