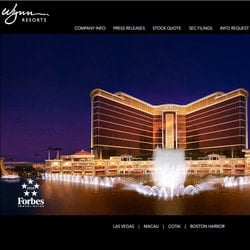 There is no shortage of candidates wanting to open a casino in Japan. According to specialists, the revenue in casinos that will open in Japan will be higher than that in casinos in Las Vegas or Singapore. In terms of income, the casinos in Japan could become the world’s second market after Macau. The Wynn Resorts Group took part in the Japan Gaming congress on the 10th and 11th of May in Tokyo and was well received by the Japanese authorities, which will be deciding which operators should get casino licences to open casinos in the Land of the Rising Sun. Wynn Resorts really wants to obtain one of the licences granted by the Japanese government even though the group is having major difficulties.

Live Dealers Casino brings you more on Wynn Resort’s difficult position. The group really wants to get a Japanese gaming licence but the group’s founder’s activities are having a negative impact on its image.

The Wynn Resorts Group isn’t really in a good position to obtain a gaming licence in Japan due to the groups ongoing problems. Steve Wynn, the group’s founder, has withdrawn from the group following accusations of sexual harassment from ex-employees. The complaints have strongly impacted Wynn Resort’s image, a group that Steve Wynn built up over several decades. Also, things aren’t being helped by the internal battle between Elaine Wynn, Steve Wynn’s ex-wife and the group’s shareholders. Owning 12% of Wynn Resorts, Elaine Wynn isn’t letting things go and is involved in a power struggle with the group’s board. She plans on using her influence to separate from Jonh Jay Hagenbuch and others too close to her ex-husband.

The gaming world has turned its back on Steve Wynn whose image has become tarnished following the sexual harassment claims. The Massachusetts Gaming Commission has declared that Steve Wynn can’t obtain a gaming licence in his own name for his Boston casino although it shouldn’t be a problem for the group.

Las Vegas and Macau casino operators are hoping to hit the jackpot in Japan. Given the potential of the market, the few land based casinos that will open in the country will be veritable “cash machines”. Sheldon Adelson, Steve Wynn or rather the Wynn Resorts group, Daisy Ho (who has taken over her father, Stanley Ho’s group) and the Société des Bains de Mer Monaco all have their eyes riveted on Japan. All are hoping to get a licence to open a casino or casinos there but there will will only be very few chosen.

This year, we should find out who are the lucky operators who will open casinos in Japan. To be continued……