Skip to content
Home/Baccarat, Macau casino/Baccarat in Macau Casinos Between Love and Superstition

Baccarat in Macau Casinos Between Love and Superstition 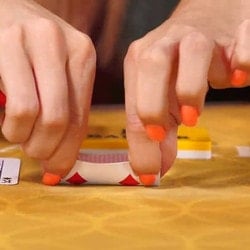 When speaking of Baccarat one tends to think of the famous ficticious spy, James Bond, who helped to popularise this game. However many people may not realise that it’s also one of the most popular card games among Asian players, the Chinese in particular. They come en masse from Hong Kong and Mainland China and contribute greatly to the income in Macau’s casinos by arriving at the new casino Mecca’s baccarat tables. It must be said that they are players apart.

If you’re lucky enough to visit one of Macau’s superb casinos, you’ll no doubt be surprised to see the excitement around baccarat and also to witness the unusual habits of the players who crowd to the gaming tables. One quite often sees Chinese players engage in a sort of ritual whereby they firmly press the cards between their fingers, glance at them quickly while barely lifting the righthand corner to quickly see the value and colour of the card then they place it horizontally again and cast another glance at it. This wouldn’t be accepted anywhere else given that the card treated in this fashion ends up bent and so can’t be used for another game. However, in Macau it seems to be not only permitted but happens frequently. Quite often Chinese players blow on the cards as if to chase away bad numbers like one chases away bad spirits.

It’s important to be aware that Evolution Gaming’s online baccarat table. Baccarat Squeeze, follows the practices in Macau’s casinos. One can see the female dealer bend the cards before revealing their value.

Between trends and superstition

While these practices may seem strange, they are almost the norm in Macau. Most Chinese players are very superstitious and given the rules and the origins of baccarat, it adds to this. As Ray Rody, a Macau Millenium College university professor explains, Chinese players believe strongly in individual luck and won’t hesitate to try to work out trends by following the results of several successive games to see if a baccarat player is on a good run or not. In order to aid their clientele, several Macau casinos have installed computer screens on the baccarat tables to facilitate these trend seekers and it’s possible to see the results of the last 20 or even 30 last games with them.

If the Macau casinos seem very “tolerant” of baccarat players, it’s because it’s in their interest to be so. During the worst of the economic crisis that shook the autonomous territory in recent years, it  was baccarat that kept the industry afloat. It brought in over 80% of the total gaming revenue in Macau. A popularity that can be explained by the simplicity of the rules of baccarat and also by the advantages for players. Statistically, baccarat is the casino game that gives the bank the lowest advantage.