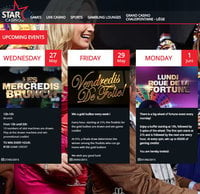 Situated 15 minutes from the city of Liege, the Chaudfontaine Casino has been the target of criminals for the second time in less than a year. The event took place on Thursday the 27th of December last just before 11pm. Three individuals stormed into the casino and threatened everyone present, clients and staff. The fifty people were forced to obey by the criminals wielding a Kalachnikov and two handguns. The intruders who were dressed in dark clothing with their faces hidden didn’t have any difficulty getting what they wanted, which was all of the money in the cash registers.
Once they had their haul, the individuals left the casino and got into a car parked outside the casino and in which a fourth accomplice awaited them. Even though the alarm went off quickly, the intruders managed to get away. Up to now several searches have not turned up the robbers who are still on the run. However, the investigators hope that the surveillance tapes will help them to identify and arrest these individuals.

The staff and clients were very shocked by this armed robbery but luckily only a few clients suffered light injuries. Panic stricken, they preferred to try to escape from the casino by breaking a glass sliding door and while getting through it some were injured. For the moment the investigators are trying to find out if the four other attacks which took place within the space of two days in the Liege region could be the work of the same gang even if the venues and the modus operandi don’t have anything in common: 2 banks, a fast food joint and a supermarket.

These two armed robberies will cause great harm to the Chaudfontaine Casino, which isn’t a good sign in this difficult time for casinos who are showing worrying results. It’s likely that this casino’s director will put a more sophisticated alarm system in place to avoid any other attempted armed robbery.

NB: Online casinos are legal in Belgium and Ladbrokes Casino has a legal licence in Belgium since 2010.